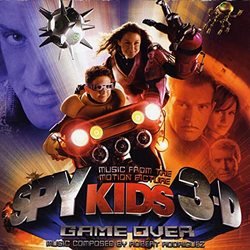 Performed by
The Texas Philharmonic Orchestra

Filmmaker Robert Rodriguez is known as a can-do filmmaker: Director, writer, editor, producer, cinematographer, production designer, visual effects supervisor. What I always find interesting is the one credit he tends to share with others is composing music. Since 2001, Rodriguez has released four movies, so he's kept himself busy. With the Spy Kids trilogy, we have seen a progression of Rodriguez taking on more film scoring responsibility. The original film had him co-writing music with Chris Boardman, John Debney, Danny Elfman, Los Lobos, Harry Gregson-Williams, Heitor Pereira, and Gavin Greenaway.  And when Spy Kids 2: Island of Lost Dreams came around the next year, Rodriguez felt confident enough to write a considerable portion of the score with John Debney helping to flesh out the rest.  Spy Kids 3-D: Game Over is the first score which has Rodriguez with a solo credit. There is some additional music by others including his brother Marcel Rodriguez who wrote music for the first film, but all together this is Rodriguez's show.

Robert also performs in the Game Over band, playing the guitar, bass, keyboard and drums. The band plays the 4 pop tunes on the album. Like the last film, there is a title track pop song ("Game Over") incorporating the main theme with a Latin bubblegum pop style. Spy Kid Alexa Vega again sings competently, but the song is nothing amazing. The final several songs are remixes of the main theme, including the song from Spy Kids 2.

Composers tend to work to find the themes and sub-text hidden inside the film. Since the composer here is the director/writer as well, the content is all on the surface. There is no depth or complexity to the music, though there is plenty of enthusiasm. This score has a playful, cartoony cut-and-paste style, doing whatever works for a scene. Rogriguez has been influenced by all of the people he has worked from already and then some. There's some Basil Poledouris ("Robot Arena") and Jerry Goldsmith ("Orbit") in brief pieces all throughout.

The only reoccurring motif from the previous films is the main four note guitar riff from the Spy Kids theme. (The Cortez Family Theme was used in the film, although it's not present on the album.) The rest of the music is a mismatch of styles. There's a playful Tango and Rumba theme for the main villain, The Toymaker (Sylvester Stallone). At one point, there's even some surfer rock ("Lava Monster Rock"). Rodriguez shows off his best skills in rockin' action set pieces ("Mega Racer", "Robot Arena", "Metal Battle") where he uses hard driving 80's power rock chords with light electronica mixed in. All added up, though, the cues sound like they are from a different film.

Then there is the bad part of this CD: the TEXAS PHILHARMONIC digital ORCHESTRA.

There's a de-emphasis in the linear notes on the "digital" when that word is really what should be paid attention to. After the wonderful work by the Texas Philharmonic Orchestra in the last film, the synthesized music here is disappointing.  It works in context of the movie, blending with the intentional fake 3-D graphics, but listening to it separately on CD, the music comes across as "cheap." Some of it simply sounds like temp music that was laid in until they could record the real strings and brass section. One track in particular ("Programmerz") feels like it came from the "Luigi's Haunted Mansion" video game.

Chances are that Rodriguez did much of it his own personal studio. Which is not said to be insulting, because I salute his ingenuity and I look forward to his much more traditional score for Once Upon A Time In Mexico. But as a listening experience, Spy Kids 3-D is lacking. Game over, indeed.