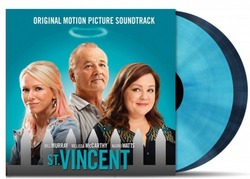 The Soundtrack to the comedy drama St. Vincent is an irresistible compilation of evergreens and newer hits—including songs from Bob Dylan, The National, and Jefferson Airplane. This 2LP At The Movies release is a very interesting package: next to presenting the song soundtrack, we've also included the original score by Theodore Shapiro on a second disc. 180 gram audiophile vinyl. Including 2 inserts. First pressing of 1000 numbered copies on (light & dark) blue marbled vinyl.