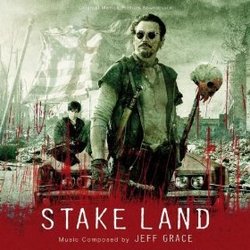 Screamworks Records' first release is a very strong soundtrack: the postapocalyptic-vampire-roadmovie (!) Stake Land, composed by the brilliant Jeff Grace (The House of the Devil, I Sell the Dead, The Last Winter). This is an intriguing work that combines elements of folk Americana, intimate piano music and aggressive orchestral action music.

Conceiving his ninth feature film score for independent horror producer Larry Fessenden, and his first for director Jim Mickle, New York-based composer Jeff Grace wrote his most eclectic and multi-faceted score so far. Known for his inventive avant garde work on genre movies such as The Roost and Joshua, Grace ventured into other stylistic areas in his work for Stake Land. "For lack of a better term, we've been calling it a post-apocalyptic-vampire-road movie," Jeff Grace says. "But, there's a lot more to it than that. There are a lot of other influences on the filmmaking. The film feels like some westerns and is much more character driven than most horror films. The vampires are also more reptilian or zombie-like."

In Stake Land, America is a lost nation where humans find themselves on the run from vicious, feral beasts. Teen-aged Martin, whose parents have recently been killed, is taken in by a grizzled, wayward hunter through the locked-down towns of America's heartland. "The characters are heading north to an area in Canada rumored to be free of vampires. Jim Mickle brought up the idea of the characters essentially traveling to more primitive times as they head farther north into more remote areas. And as they travel, the characters also become more of a family and more intimate. With those main points in mind, the score becomes sparser and more intimate as they move along, overall," Grace explains.

The composer and director discussed the mood of the score and wanted to combine an Americana feel "to speak to the small towns and countryside they travel through," more intimate material which "speaks to the characters' isolation and the sadness of what they've lost," and darker elements "to reflect the vampires, the idea of night, and especially the darker side of man."

Director Jim Mickle says that he "wanted the score to have an Americana feel that could invoke a dustbowl, depression era rather than pushing for a futuristic apocalypse. It should feel homegrown almost like the music was created by whatever instruments were left over. I temped the film with a lot of different flavors and styles, and it sometimes felt like the movie could wind up feeling like it had an identity crisis, but Jeff found a way to combine all of these elements organically and worked themes and styles off of each other so well, it blew away my expectations."

Among the many unique ideas realized in the score is a cello effect used in The Brotherhood. "Dave Eggar and I are always looking for new sounds," Grace says. "He told me about this weird technique he was trying by pulling on the strings, it sounded fantastically freaky, so I wrote a melody right there and threw some delay on it."

Other key elements of the score is the piano material for the intimate moments, and the Americana music for fiddle and guitars. But perhaps the funniest aspect of the score is the following. Anyone who watched the World Cup in 2010 knows the piercing sound of the South Afrcian vuvuzela, and Stake Land might very well be the first film score to feature this sound. "The vampire attacks get that held brass note—I was watching the World Cup when I wrote that and actually layered in some vuvuzela!" Jeff Grace says.