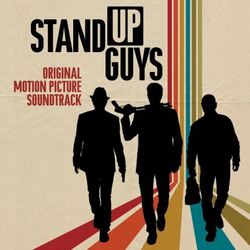 1. Hard Times - Baby Huey & The Baby Sitters
Sampled by a multitude of artists, even covered by John Legend and The Roots in 2010, the psychedelic soul sound of the Curtis Mayfield-penned "Hard Times" is a sad reminder of what could have been—Baby Huey passed away during the recording of his one and only album The Baby Huey Story: The Living Legend.

2. Old Habits Die Hard - Jon Bon Jovi
Jon Bon Jovi: "The inspiration for "Old Habits Die Hard" comes directly from the dialog, page 1 scene 1... There's a line in the dialog that would not be typically a song lyric: 'you look like shit, so do you my brother.' That immediately sets the tone for who these guys are, will be, and throughout the process of this movie you see what will happen to them."

4. Not Running Anymore - Jon Bon Jovi
Jon Bon Jovi: "I had to get into the confessional booth. Here's a guy Valentine [played by Al Pacino] that's hoping that there is absolution somewhere before that final breath is taken and when he realizes there isn't going to be he says 'ok no Hail Mary's will save me, you learn to live with the memories.' I had to put myself in that confessional be that Catholic school boy one more time and try to find that voice."

5. Get Down With It - Wayne Cochran
Sporting a white pompadour and heavily influenced by James Brown, the outlandish Wayne Cochran brought soul music where few were able to—all white clubs in the Midwest and South, usually home to crooners like Frank Sinatra and Dean Martin. In spite of never having a chart hit, Cochran achieved national recognition through TV appearances.

6. How Long - Charles Bradley featuring Menahan Street Band
Brooklyn's Daptone Records fashions itself after legendary soul labels Stax and Motown. Their musicians are like a family and regularly perform with each other in various incarnations. A not-quite-so-overnight-succeess, at age 51 Charles Bradley returned home to Brooklyn after 20 years on the west coast working as a chef. He was put together with the Menahan Street Band (featuring Daptones recording artists and members of Sharon Jones and The Dap-Kings, El Michels Affair, Antibalas, and the Budos Band) and soul magic has been made.

7. Fooled Around and Fell In Love - Elvin Bishop
We see another side of Doc as he takes Valentine to Miss D's. In the film the song embraces a simpler time of their youth of these characters. A bit of trivia—it features Mickey Thomas on lead vocals and Donny Baldwin on drums, both of whom would soon leave Bishop to join Jefferson Starship.

8. Stand Up Guys - Lyle Workman
Lyle Workman is a seasoned guitarist who has played with Sting, Beck, Michael Buble, Bryan Adams, Alanis Morissette, Shakira and Sheryl Crow. As a composer he wrote the music for Superbad, The 40 Year-Old Virgin, and Forgetting Sarah Marshall. Lyle Workman: "This is the first score piece of music and features the melodic theme we hear throughout the film."

9. Give It Back - Sharon Jones & The Dap-Kings
Daptone recording artist Sharon Jones and the Dap-Kings are part of the Daptones movement—eschewing modern techniques in favor of analog recording methods to capture a 1960s/70s soul sound. The Dap-Kings backed up Amy Winehouse on her breakthrough album Back to Black and subsequent tour.

11. When Something Is Wrong With My Baby - Sam and Dave
From when 'music was music' Val meets Doc for a drink after being released from a 28 year stint in jail and bribes the DJ to play this classic track. This track was the only ballad of Sam and Dave's to be released as a single.

12. I Was Painting You - Lyle Workman
Lyle Workman: "We wanted the songs and score to stand side by side in unity, to feel cohesive and all live in the world the characters occupy... With music, over thinking can be the death of inspired expression."

13. Love From Above - Leroy Reynolds
Taken from the album SOULTOWN: The Lost Sound of Shelbyville this song by Leroy Reynolds is a rare R&B gem that has found a wonderful home in the film as Hirsh makes his visit to Miss D's with Val and Doc.

15. Chew Gum Or Kick Ass - Lyle Workman
Lyle Workman on the music of Stand Up Guys: "[Director] Fisher [Stevens] wanted the music to feel like it was central to the main characters; music they would listen to, music that would score their lives, so to speak. Blues, R&B, soul and early rock and roll fit that template. We talked about it being gritty and soulful, but also playful and lending a subtext of history."