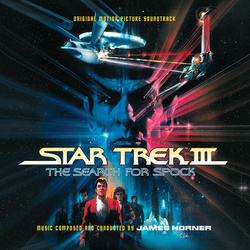 Intrada announces a reissue of James Horner's score to Star Trek III: The Search for Spock. Thanks to the cooperation of Paramount Pictures and Universal Music Group, Intrada once again makes this long out-of-print and important score available. Following his score to Star Trek II: The Wrath of Khan, Horner was able to build upon the groundwork he laid in the earlier film and extend themes, introduce new ideas and create a powerful follow-on score. While the original Capital LP featured highlights of the score, it was missing some critical and often very dramatic sequences. The Film Score Monthly release expanded the original LP program, filling in those big gaps in the program, including "A Fighting Chance to Live" (where the Enterprise gets destroyed) and "Genesis Destroyed." The expanded program also included film versions of tracks such as "Stealing the Enterprise" that did not appear on that initial vinyl release.

The program for the 2-CD expansion could not be improved upon, so this features the same program. The important thing here is putting this title back in print, where it joins three other Star Trek film scores on the Intrada label: Star Trek IV: The Voyage Home, Star Trek V: The Final Frontier and Star Trek VI: The Undiscovered Country.