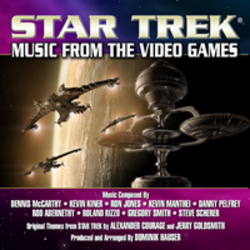 This release features new recordings of music produced and arranged by Dominik Hauser from Star Trek video games. With a well-known franchise like Star Trek, composers are usually asked to reference the iconic Star Trek themes in some manner and some games actually use the real Star Trek TV and movie themes under license in their soundtracks. Many times, though, it is not possible to license the actual music and video game composers are usually asked to provide music that reflects a similar musical sensibility and this presents a unique opportunity for both veteran composers and budding composers. This collection of mostly previously unreleased music selected from the Star Trek video games has been faithfully arranged and produced by Dominik Hauser with regard to the original performances in the games themselves.

BUYSOUNDTRAX Records presents the first compilation ever of music from the Star Trek video games. The booklet contains liner notes written by author Randall Larson, featuring new insights from the composers. This is a limited edition release of 1000 units.