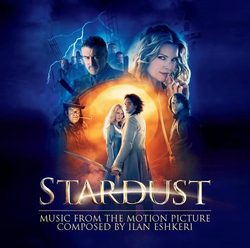 Is it unfair, or is it expected, to compare the score for a fantasy film to Howard Shore\'s Lord of the Rings? To me - and I am not alone here - this trilogy as a whole is a five-star score, so in a sense, such a comparison is really just a more specific way of giving a rating out of five stars. So...

What is it about moving string lines, French horn and oboe solos, and tinkling piano that signals you\'re entering a different, magical world? With the use of these sounds, Stardust\'s "Prologue (Through the Wall)" joins the company of The Time Machine (Badelt), Beauty and the Beast (Menken), Hook (Williams), Harry Potter and the Sorcerer\'s Stone (Williams), and all three Lord of the Rings films (Shore). Stardust, by sound here, is most similar to The Time Machine; it differs from Hook and Lord of the Rings in tone: Hook is often fanfare-ish, and Lord of the Rings tends to be darker, while Stardust is fairly lighthearted. Also, both these films use this magical soundscape either to introduce or as part of a complex set of themes, which Stardust as a film doesn\'t require. Lord of the Rings is so thematic that once you are familiar with the score(s), if you listen to a track randomly you can tell what is happening in the movie, or at least what the setting is, based on the theme and tone of the music. Stardust\'s story is simpler, not as epic, and doesn\'t lend itself to such an intricate set of themes. But composer Ilan Eshkeri\'s selection of a few themes for Stardust works.

I am generally pleased with Eshkeri\'s orchestration choices for this score, beginning with this opening sound and including the classical feel of certain orchestral cues, oboe and horn solos, moving string lines for pacing and tension, and brass and choir for drama, action, and climax. While Eshkeri uses a few themes, he also ties parts of the film together with soundscapes: "Shooting Star" has a cue with brass and choir undercut by a moving string line, which returns in "The Star Shines."

The most prominent theme in Stardust is the love theme - though it could also be Tristan\'s theme -  which appears in the tracks: "Tristan," "Tristan and Yvaine," and "Coronation." It\'s a beautiful melody, but unfortunately, it\'s far too similar to one of Howard Shore\'s Lord of the Rings themes - the Shire - for it to have its full effect in Stardust. This - generally - is my main criticism of the score: that while good, the music is slightly detrimental to the film, in part because this theme is too similar to another well-known one, but also because it is a little heavy-handed. Rather than support the film, the music occasionally overpowers it, the fanfares too loud and bright, the drama more intense than some scenes need. Lord of the Rings works because the music provides a background soundscape that reflects the settings of the scenes, the characters, and the emotional depths of the story. Because the music has an epic story and deep set of characters to work with, it can get away with a few powerful, bombastic cues. Stardust\'s fairly singular storyline doesn\'t support this, so the intensity of the music in some scenes feels overdone.

And yet some of these cues are the best on the album. It\'s an exciting and energetic score, and because of its tendency towards bright fanfares, it\'s fun to listen to. "Coronation" is one of my favorites, despite being the perfect example of the tone I criticized above, and despite ending with the love/Tristan theme that sounds like The Shire. It has a good balance of moving strings undercutting the brass fanfare, nice chord progressions and energy, and I love the ascending line about halfway through the track. The only track I tend to skip is "Pirate Fight" and I know it\'s a comic scene in the film, but it pulls me out of the momentum of the album. First and foremost, a score has to work for the film, and how it sounds on album is secondary. While Stardust fits the adventurous, dynamic sense of the movie, I like it better on album: it stands well on its own, and in the film, has a tendency to overpower some of the scenes.