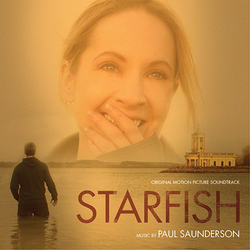 MovieScore Media announces two scores to be released from the filmography of composer Paul Saunderson. The first title to be announced is Starfish, a drama based on a devastating true story of an average family man battling a deadly disease. Tom Ray's (Tom Riley) ordinary life; a stay at home father taking care of his daughter Grace (Ellie Copping) and pregnant wife Nicola (Joanne Froggatt) is stuck down by a rare disease which literally eats him up alive. With a baby in tow, the Ray family must face impossible challenges as the patriarch tries to keep his family together. The film was written and directed by Bill Clark, whose previous film The Christmas Miracle of Jonathan Toomey got its soundtrack released by MovieScore Media as well.

"For me, the story of Starfish is that of hope, so I wanted the music to reflect that rather than to go too dark as the film's subject matter was so heavy already" explains Paul about the score. "I wanted to create a sense of isolation and rawness in the music to help convey the emotions going on in Tom and Nicola Ray's head at this time so by mainly using a piano and string trio, I was able to make music become more intimate and fragile when we needed it the most. By using such a small group of instruments I was adamant in the recording process that I wanted to hear the instruments breath – for example some of the piano playing is so quiet and soft, you can almost hear the piano strings vibrating and key noises, which I feel all add to its character."

After receiving his Music degree from The University of Leeds in composition and electro acoustic music, Paul Saunderson immersed himself into the world of film music working as assistant to the award winning composer llan Eshkeri (Still Alice). As a composer, he has recently completed work on MTV's eagerly awaited action adventure series The Shannara Chronicles as well as the score for Jim O'Hanlon's directorial debut A Hundred Streets, starring Idris Elba.