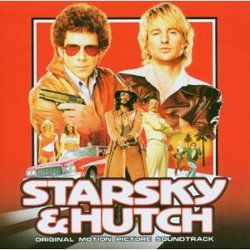 Okay, so I thought Starsky and Hutch was a moderately funny movie, an earnest prequel to the television series of the 1970s. Within the film, the period's music obvious set the tone. And the released soundtrack is pretty much all 1970s gems: Unfortunately, I can't suggest this soundtrack to any but the most diehard of seventies fans. And at that, only those fans who don't already own one or more compilations of this era's music.

There are a couple disco tunes that genre fans can appreciate. Anyone who'd like these tunes probably already knows them already, so I'll just rattle them off. Disco fans can look forward to Brick's "Dazz" (for disco + jazz), thesp Maxine Nightengale's "Right Back Where We Started From," a pre-laughingstock Jackson 5 doing "Dancin' Machine," KC & The Sunshine Band's ubiquitous "That's the Way I Like It," and Brigette Romanek's "Love Will Keep Us Together."

Those who strenuously dislike fast tempos might like the more traditional rock fare on the soundtrack. Presented is Johnny Cash with his famous "Folsom Prison Blues" and Chicago with its 1975 single "Old Days." Even more mellow is The Band's "The Weight" and Waylon Jennings' "I'm A Ramblin' Man." For AM Gold masochists, the Starland Vocal Band's "Afternoon Delight" is harmonized on this album. If I recall correctly (my SoundtrackNet-provided fact-checker/personal assistant is on hiatus), this band was the one used to drive administrators and trustees crazy in PCU.

For those knowledgeable in pop music trivia, there are two in-jokes on the soundtrack. For those with other things to memorize, I'll explain them here. The first was Owen Wilson with his cover of "Don't Give Up On Us." Besides the vogue "revisionary deconstructionism + gay subtext = comedic gold" factor it provided the movie, this was "ha-ha" because it was sung a generation ago by David Soul who played, yes, Hutch in Starsky and Hutch the television series. Yay for meta-contextual humor. The soundtrack also features a '79 funk tune by Leon Haywood called "I Want To Do Something Freaky To You." Fourteen years later with The Chronic, Dr. Dre sampled that in "Nothin' But a 'G' Thang." This Left Coast rap anthem featured Snoop Dogg, who propelled to stardom. And Snoop's in this movie! Get it? Yuks-a-plenty.

The last noteworthy track is coincidentally the last track on the CD. The composer, Ted Shapiro, contributes an action theme called "Two Dragons" that's completely Hayesian (I'm talkin' about Isaac. Can you dig it?) in its funk sensibility.

In summary, I'd give this album two stars. Go buy The Chronic instead.