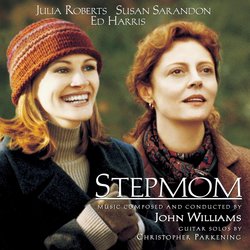 In the tradition of such scores as The Accidental Tourist and Sabrina, John Williams' score to Stepmom is filled with light and heavy emotional moments which take a direct approach in making the listener become affected by the score. That is, it doesn't make excuses for itself: this is a score determined to make you cry (in the context of the movie, that is). Stepmom is about the relationships between Julia Roberts (Ed Harris' new wife) and Susan Sarandon (Ed Harris' ex-wife) and the children in the family. Ultimately, the plot is rather predictable and lends plenty of opportunities for Williams to bring in the string section and bring in the needed little bit of energy to "push" you to the next level of emotion.

Most of the score consists of piano and strings - a combination which has worked well in some of Williams' other more emotional dramatic-comedy scores. More notably is the use of a lot of classical guitar, performed eloquently by Christopher Parkening. (I personally though it would have been neat if classical guitarist John Williams performed in this score by composer John Williams - a little joke, I suppose.) Very soft, and very sentimental, the quiet guitar work evokes (for me) feelings of autumn, and I can see this score providing perfect listening music for relaxing in a hammock in October in New England.

Some classic Williams moments appear in Track 4 ("The Soccer Game") - the light orchestral ditties segue into a dark building moment supplemented with (what sounds like) synthesized elements. Some notable moments in the score: a nice classical-sounding string melody ("Isabel's Horse and Buggy"), the whimsical, playful orchestra in "Ben's Antics", and of course the sad but hopeful music in "Jackie's Secret" and "Bonding".

With 57 minutes of music on this album (including 2:30 minutes of "Ain't No Mountain High Enough"), there is more than enough music to make anyone happy. Ironically, the best track is the "End Credits", in which Williams revisits every major theme and notable moment from the score. (After all, who better to write an End Credits compilation than John Williams?) This CD contains some really relaxing, enjoyable music - but it might not be worth getting unless you've seen the movie or are a huge Williams fan. The score works well for the film, yet I can't keep wondering what Patrick Doyle had written for Stepmom before Williams stepped in. Williams has done better, and will no doubt continue to do so, but also considering he only had about two months or so to write this score, it's a very commendable effort on his part.