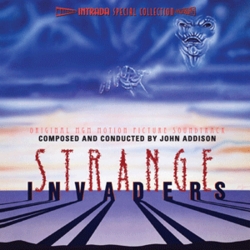 For the 1983 sci-fi feature Strange Invaders, John Addison created one of his most strikingly effective and exciting scores of his career. In keeping with the challenge of writing music for a science-fiction tale that tips its hat to both '50s fodder and '70s class, Addison composed a score that acknowledges both the dramatic sensibilities of the movie and the smiles in between.

While Addison might have seemed an unexpected choice, his strongly melodic style had already sent up classic sounds for other films and that served the composer well in tackling the uniquely satirical yet overtly serious musical demands of Strange Invaders. Addison first shows himself to be a master of sweet, seditious Americana in in the film's opening with noble brass and strings conveying a bucolic, all-is-well portrait of small town suburbia. But normalcy is shattered with the alarming orchestra-and-synth arrival of the invaders' "Mother Ship," bringing with it a humming, insect-like theremin-and-string motif that will embody what are essentially grasshoppers from outer space.

To present the complete score for the film, Brigham Young University provided access to the only suitable master elements. With their invaluable assistance, we were able to secure analog-to-digital transfers of the composer's personal 1/4" 7 1/2 i.p.s. 2-track stereo copies of the scoring sessions—containing every print take in reasonably clean stereo sound. The audio was clean, albeit with some hiss evident from the slow speed analog source tapes originally made by the composer.

In Strange Invaders (1983), an entomology professor named Charles Bigelow is thrown into a bizarre custody battle when his ex-wife Margaret's people come to claim her hybrid daughter Elizabeth. Enlisting the help of Betty, a sexy and intrepid tabloid reporter, Charles pursues the truth behind Elizabeth's disappearance. He battles proto Men in Black bureaucrats, and solicits the aid of the similarly alien-napped Willie to discover the invaders in Centerville, Illinois. With the place frozen in time since their arrival in 1958, the disguised visitors are now readying to return home after their 25-year-long mission to observe earthlings—with their most prized result in tow.