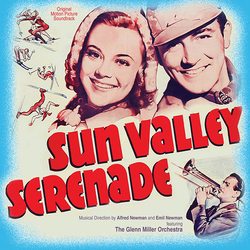 It's funny how music can define an entire era, and Glenn Miller's unique sound did just that. It was no surprise when Twentieth Century Fox snapped up Miller and his band for the movies. He only did two but they were perfect vehicles. They were cleverly built around him, and he was surrounded by excellent actors, singers, and dancers. The stories were simple, they didn't overstay their welcome, and the music was superb. Sun Valley Serenade featured Glenn Miller and his orchestra, along with The Modernaires. In addition to some Miller classics ("Moonlight Serenade," "In the Mood"), the movie also featured a few great songs by Harry Warren and Mack Gordon, including a song that would become one of Miller's biggest hits, "Chattanooga Choo Choo," which, in the film, is a spectacular production number with Dandridge and The Nicholas Brothers. Another great new song, "At Last," was also recorded for the film, but wasn't used, except as background music for several scenes. The song itself would end up in the next Miller film, because Sun Valley Serenade proved to be so popular, that Fox immediately put another Glenn Miller vehicle before the camera, this one entitled Orchestra Wives.

Orchestra Wives was a bit more serious than the light and airy Sun Valley Serenade. This time the cast included George Montgomery, Ann Rutherford, Lynn Bari, Cesar Romero, Marion Hutton (sister of Betty), The Modernaires, and, of course, The Nicholas Brothers. We also get some wonderful Harry Warren and Mack Gordon songs, including "At Last" (the castoff from Sun Valley Serenade), "Serenade in Blue," "People Like You and Me," and the instant classic, "I've Got a Gal in Kalamazoo." The latter was, like "Chattanooga Choo Choo," nominated for an Oscar for Best Song.

This is the first time Sun Valley Serenade and Orchestra Wives are being released complete, each CD close to eighty minutes in length. Previous LP and CD releases didn't have particularly good sound, but for this release the sound has been lovingly restored by Mike Matessino from the Fox vault elements—it's safe to say, you've never heard these scores sounding like this. It should be noted that while the films were given a synthesized stereo treatment in the early 1990s for home video, all of the original music elements are, in fact, mono. Yet they remain as clear and vibrant as the day they were recorded. All the songs, the incidental scoring, and some amazing bonus material is all here. While some of the bonus material had made it onto CD, it was taken directly from the films themselves and sounded horrible. And there are quite a few never-before-released tracks.