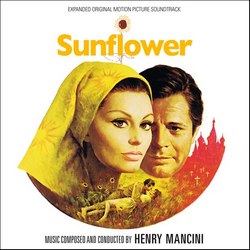 Track Listing Legend:
* Does not appear in the film.
** Contains previously unreleased material.

World premiere release of the unforgettable Henry Mancini score, one of his most romantic scores.

At the time Mancini was asked to score Sunflower, he was a legend in his field. His unforgettable melodies for director Blake Edwards, in particular, had brought him international renown. The composer was specially sought after by De Sica and Ponti—who agreed on little but that Mancini was the perfect choice for their film. Mancini fully justified their confidence by producing one of his most beautiful and dramatic scores.

Its twin love themes, capturing the rich flavors of both Italy and Russia, are exquisitely balanced between romantic longing and painful melancholy; while powerful themes for the characters' journeys add depth and pathos. Sunflower earned Mancini an Academy Award nomination for Best Music, Original Score, and inspired the hit song "Loss of Love," with lyrics by Bob Merrill. It was especially successful in Japan, where Mancini's celebrity rose to new heights.

Although Sunflower was a very famous score and the LP released at this date was an incredible success (having been reissued several times on CD, though always in Japan), this is the premiere release of the complete score, including every note written by Mancini for the film (even several cues that ultimately were not included in the final cut of the film).

For this definitive presentation we have included the complete score written for the film on disc one, carefully mastered by Claudio Fuiano from the first generation mono tapes—the film was mixed in mono—recently found in Italy. On disc two we have included the remastered album version in full stereo, from its original sources courtesy of Studio Canal. The package includes a 20-page full color booklet with liner notes and track-by-track analysis by film music specialist John Takis.