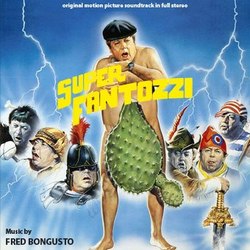 Of this OST no one note was released at that time; thanks to the stereo master tapes kept in good conditions in the Cinevox Records Archives, we were able to realize the dream of many fans of the accountant (after the fabulous double CD box produced by Beat Records under license Cinevox Records with the OST of the first two classic Fantozzi movies).

Fred Bongusto has composed a funny score made with synthesizers, dominated by a main theme in a dance vein that is used in the opening titles and later repeated in the sequence of the battle of Marathon too and a whole nice variety of motifs such as the mystical theme for the sword Excalibur, and cheerful and funny ones as for the sequence of the canoes race, charleston music for the scene in the nightclub at the time of Prohibition (also reused in the end credits), music with oriental flavor for the Japanese sequence and futuristic music for the Fantozzi family in space.