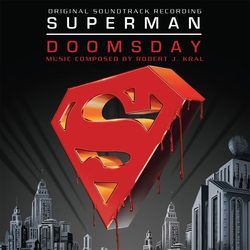 Despite all the potential snares and pitfalls of composing music for the Superman franchise in the everlasting wake of John Williams\' masterful take on the character, Robert Kral manages to turn Superman Doomsday into a very enjoyable listen and an effective one in the movie. The direct-to-DVD, PG-13-rated animated adaptation of the Death of Superman storyline has created a unique niche for itself by tearing itself apart from comic book and movie continuity. Thus, Kral was asked to stay away from Williams\' enduring March and Fanfare for the Man of Steel and come up with a darker, more dramatic theme for America\'s Boy Scout. Surprisingly though, there are subtle nods to the 1978 score, mainly in the simplified Superman Ostinato which opens the album and a brief theme on the flute for Superman\'s Fortress of Solitude which seems to play around intervals and keys used in the original Krypton Theme. Kral\'s main theme for the Man of Steel, however, is distinct from both the March and the Fanfare and yet manages to be incredibly memorable. Crafting a different theme for Superman is a bit like reinventing the wheel without using a circle; Kral does manage, quite admirably, to break free of the pop-culture-embraced shackles of Williams\' material and I found myself humming this new theme quite a few days after watching the movie.

The film itself was also a surprise: an animated take on Superman that didn\'t suck and whose action sequences were absorbing and deeply effective. The animation itself is to thank for their fluidity and force of impact, but Kral\'s propulsive score injects even more might and fury into them. His style is immediately recognizable in the sequences where the feral Doomsday tackles Superman: the way he orchestrated the action cues on Angel and his peculiar use of metallic percussion return to the forefront, creating a dynamic sound overflowing with brutality. Superman\'s Theme is only stated a few times: his last battle firmly belongs to Doomsday\'s blinding rage and Kral unleashes a cacophony of brass and anvils on the Last Son of Krypton.

"Superman vs. Superclone" depicts the true Superman\'s fight against his ethically-challenged clone and the percussive rage of the earlier battle is replaced with the recurring presence of Kral\'s bass ostinato and more imposing brass statements. Less savage and more epic, this battle music is perhaps more traditional but no less enjoyable. The album concludes with a succession of radiant fanfares for the Man of Steel and the return of the Lois and Superman Love Theme, which formed the B section of the "Main Title" and which salt-and-peppered the score. It is a hopeful and mature melody, feminine in its romantic ascent up the scale but restrained enough so as not to become cheesy.

The biggest limitation to the score\'s scope is the use of samples. An orchestra could not be afforded for the project, which led to Kral utilizing samples, including new, innovative brass instruments from Wallander Instruments which, according to their website, "combine advanced behavioral modeling with extensive amounts of sound data extracted from acoustic measurements and recordings of real instruments". The brass is very expressive in Superman Doomsday, especially in the Doomsday battle sequences where Kral really puts it through its paces, but it can\'t help but sound just the tiny bit "off", as most samples and synths do. An intensely dramatic sequence such as Superman and Doomsday\'s death in "Superman\'s Sacrifice" blew me away when I saw the movie. Kral creates a dense harmonic progression for the strings and brass based on Superman\'s Theme devoid of distracting rhythms, purely focused on the grandeur of the sacrifice. While the music itself is wondrously effective, I couldn\'t help but ponder how much more effective it would have been had it been recorded with a live ensemble. That, of course, is not the composer\'s fault and kudos to Kral for using some of the most innovative sampling and synthesis technologies on the market to bring his score to life.

Superman Doomsday is a fun and compelling score, both in the movie and on its own. While the early action sequences will have fans remembering Kral\'s stylistics on Angel, his main theme, bursting with heroism and sacrificial nobility, couldn\'t be different. For fans of the Superman franchise who can\'t get enough, Superman Doomsday is a definite recommendation.