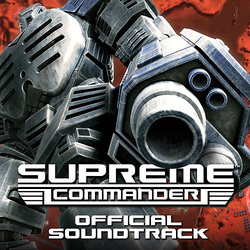 Jeremy Soule has made quite the name for himself in the world of music for video games, with enough projects each year for the past seven that he almost exceeds what many film composers produce for the silver screen. And much of his work appears in high profile game titles, such as Star Wars and Harry Potter, immediately drawing comparison to John Williams which can be simultaneously flattering and damning. Now, I must say that I am in no way a "gamer", have never owned a gaming system and have no desire to delve into that area of fandom, but being a life long fan of film & television music I am easily able to appreciate what a skilled composer can bring to an imaginative video game environment. To date, Howard Shore\'s SUN: Soul of the Ultimate Nation has been the most impressive music written for the medium that I\'ve heard, but what Jeremy Soule and his co-composer brother Julian have contributed makes for a wonderfully charged listen.

The storyline of the 2007 game is set against a galaxy-wide conflict, which has lasted 1,000 years and involves three races so it is easy to see how this expansive canvas might really inspire a composer. Due to the war setting, a martial feel is prominent throughout the score, expressed right out of the gate in "Bellum Infinitus (Theme from Supreme Commander)" as the snares rally and determined, noble melody is intoned by brass and strings. In regards to instrumentation, it is an entirely sampled orchestra, some of which the Soule brothers recorded themselves; the horns and percussion sound especially real, and provide the required muscle. The main theme goes through several iterations in the opening tracks, such as the energetic "An Old Idea Made New" which also features some really triumphant brass and choral work. "United Earth Federation" is a tense warm-up for the lengthy and exciting "Risk, Relief and Victory", both revisiting the main theme in various guises.

The best analogy at this point might be to Basil Poledouris\'s Starship Troopers, specifically the broad thematic material heard in "Klendathu Drop". Fans such as I of that big, brawny yet melodic style of action will find much to enjoy in Soule\'s effort. In addition, menacing low brass join ambient synths and percussion in "The Cybran Nation", busy and buzzing muted trumpets spark "Symbiont Legion Rising" while an electronic rhythm percolates in "Employed Strategy". Another full-on orchestral assault is heard in "The Winds of Change", including some winning, repeating, echoing brass lines. The main theme returns in its steady, determined state in "One Planet at a Time" while mysterious, airy synths dominate subsequent tracks like "Followers of the Way" and "Enlightenment".

More charged brass and snare action highlights "Clash of the Champions", even revisiting a short motif heard in earlier action tracks as the main theme, all before the large-scale wallop of "Massive Attack" and "The Final Cataclysm", drawing in choral work and exclamations of the main theme. There is certainly a healthy dose of action in this score and perhaps the only downside is that it starts at full throttle so there is little room for it grow more expansively once the finale is reached. However, it is delineated quite well orchestrationally so that it never sounds like a cacophony of sound and has an infectious energy and gusto. There are bonus tracks included in this download-only release, the first being "The Future Battlefield", an amped version of the main theme effectively acting as an end title piece and the others are "sketches" of battle music, all a bit heavier on the techno rhythms but no less engaging. Certainly worth a listen!