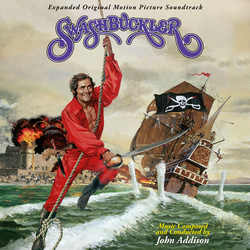 Quartet Records, in association with Universal Pictures, Universal Music Special Markets and Geffen Records, is glad to continue celebrating the centenary of the wonderful maestro John Addison, with an expanded, remastered edition in a 2-CD set of his exciting, classic symphonic adventure score for Swashbuckler!

Conceived as an attempt by producer Jennings Lang to return to the classic Hollywood pirate movies of the '40s and '50s, the film was directed by James Goldstone and starred Robert Shaw, James Earl Jones, Genevieve Bujold, Peter Boyle, Beau Bridges and Geoffrey Holder. John Addison's delightful score is a declaration of love for the classic Hollywood adventure music of Steiner, Korngold and Newman, as well as that by his compatriots William Alwyn and Ralph Vaughan Williams. It is an orchestral tour-de-force that features a memorable main theme but also encompasses a fresh and original score full of tunes, motifs, adventure, romance, tension and mystery.

This restored 2-CD set showcases the score as recorded for the film, featuring a selection of alternate cues, as well as the remastered original album prepared by the composer for MCA Records in 1976 (reissued on CD by Intrada Records in 2008), which utilizes different mixes and edits in some cues for a better home listening experience.

The entire collection has been painstakingly remixed, restored, assembled and mastered by Mike Matessino, preserving all the freshness of the original recording. The package includes a 16-page full-color booklet with in-depth liner notes by film music writer John Takis.