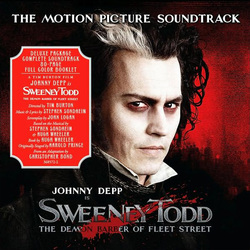 Some friends feel I\'m not to be trusted here. I am an admitted fan of Stephen Sondheim and a devoted fan of the original Broadway stage production. Sweeney Todd has always been a crown jewel on the Sondheim crown. While it was never the most popular show he ever produced, it achieved a strongly devoted following since the original 1979. I\'ve waxed poetic on it before. In short, it\'s one of the great musicals of the twentieth century.

Fans tend to be a prickly sort and resistant to even the slightest bit of change. That means I have to be completely opposed to the casting of Helena Bonham Carter as Mrs. Lovett, since it reeks of the worst type of nepotism. And I couldn\'t completely possibly accept Johnny Depp as Sweeney Todd. While both are great actors, common logic suggests they don\'t have the musical chops for the roles.  This show requires singers that aren\'t only just good - they have to be phenomenal.  With the speed of the lyrics and the complexity of the music, Sondheim musicals are the Mt. Everest for skilled singers. Even Angela Lansbury (who originated the role of Mrs. Lovett) had problems finding places to breathe. And that means, without a doubt, I should be completely opposed to the rewriting and rearranging of the music and lyrics - even though Sondheim himself was there to approve the changes.

On the other hand, this could be seen as a brilliant reinterpretation of the music, using the 2005 Revival that starred Michael Cerveris and Patti LuPone on Broadway. That show used a minimalist approach where the cast performed the underscore when not on the smaller stage. Realistically speaking, taking this show from the stage would require some trimming to reach a two hour running time. Choosing actors rather than singers, you could have actors that could really deliver the emotions. With great actors like Alan Rickman, Timothy Spall and Sacha Baron Cohen in supporting turns, this strong ensemble could really deliver.

The actual film is something in the middle, at some times brilliant and most times incredibly underwhelming.  The last thing I want to come off as is a wounded fan but Burton misses the point. Or more importantly, he squeezes the point in the same template he\'s used for roughly twenty years. The only way he can figure for his actors to handle the music is to slow it down and handicap the lyrics so that they can be manageable. The point is to make it more "realistic". This is bizarre because a musical is inherently unreal. Also, the penny dreadful elements of the plot do not lend themselves to moody introspection.

The lead actors do fine dramatic performances within the movie and there\'s a lot of praises for their singing. But it is the sort of affirmative action acclaim  for celebrities that do a competent job in an area they\'re presumed to be unskilled. Depp is a decent singer. He can tackle some of the softer ballads like "Pretty Women" and his "Johanna" reprise. While having even less of a voice than Depp, Carter similarly does adequately in "Wait" and "By the Sea". The two leads bulls-eye the tone when the song inherently meanders ("A Little Priest"), but many other times, they sound lost in slow motion. Depp never has the quicksilver delivery required for the material.  In the movie, the character is crazy from minute one and has no variation in intensity. In the musical he slowly goes insane, finally flipping in "Epiphany". The reference has always been Len Cariou, who originated the role. Part of Cariou\'s brilliant performance was that his voice was cracking since he would soon lose those pipes to vocal cord damage. That genuine anger and madness is mostly lost here. Occasionally, Depp shows that he could have pulled it off (in brief moments during "Final Scene") Even George Hearn (the other beloved Sweeney) had a gallows humor to him. Depp does neither of these things. He only has technique. The character has no vibrancy. In fact, he sounds a lot like Captain Jack Sparrow.  He gives a smooth, steady voice but little else in terms of register. In comparison, Carter has a lot more character. She works hard to engage to humor but her lack of training keep her from properly handling any of Lovett\'s show stopper pieces ("The Worst Pies of London", "God, That\'s Good").

The famous supporting actors work fine. Alan Rickman sings support in "Pretty Woman," and while he doesn\'t have a very melodic voice, he is not being asked to carry a number. Of all of the famous people, Sacha Baron Cohen is spot on as Pirelli ("The Contest"). The young unknowns playing Anthony, Joanna and Toby are across the board great. Jamie Campbell absolutely kills with "Johanna", giving the song the right amount of passion along with a tinge of frightening obsession. Jayne Wisener makes "Green Finch and Linnett Bird" (a song I\'ve never been particularly fond of) quite touching. Of the bunch, Ed Sanders is the find. Changing the retarded man-child character of Toby into an actual child is a fantastic change on Burton\'s part. "Not While I\'m Around" is the emotional highlight of the movie as it perfectly balances the pathos of Mrs. Lovett\'s betrayal.

With all of my endless complaints and gripes, Sondheim\'s score is still amazing on all levels. Thankfully the underscore has been adapted faithfully, so all of its Bernard Herrman undertones have been left intact. This brings us to the actual changes to the musical numbers. Within many numbers, there are invisible revisions and edits that only the obsessive would notice. I agree with cutting the chorus numbers and I can possibly see cutting the opening title "Ballad of Sweeney." I can\'t for the life of me see why they do "Opening Titles" the way they do. It\'s an adapted version of "The Ballad", only there\'s no main melody orchestrated. It\'s only the underscore so it sounds like some karaoke version of the theme, waiting for someone to sing or play the melody. To know how it would have sounded otherwise, check out Symphonic Sondheim.

A similar problem is how the ensemble songs have been edited. Songs like "Pirelli\'s Miracle Elixir" and "God That\'s Good" no longer have the crowd accompaniment, I assume to focus with the lead actors. This kills the entire momentum of both songs. Both pieces are about hucksters and how they are pulling one over on the public. If you can\'t hear the crowd\'s reaction, then you lose half of the point. Specifically in "Pirelli\'s Miracle Elixir", Toby first wins the crowd over with his pitch and then loses them when Sweeney sabotages him. You no longer get this. The lyric "God That\'s Good" isn\'t in the song "God That\'s Good" any longer. Musically speaking, we lose the strong counterpoint punctuation that the crowd provided at the end of each verse. It only serves to further slow down this wonderful music. There\'s nothing here like the rousing climax of "God That\'s Good" in the of the original cast album.

Within the movie, the music is overall listenable but on the album all of the above imperfections are magnified. The album has awkward mixing, blending studio recordings with location sound.   Even the two versions of currently released album are confusing. The one fans will want to get is the "complete" version (which has 20 tracks). The truncated "highlight" version (which contains 16 tracks) fails to even include the finale track. Since both are one disk releases, this type of swindling is deplorable. Especially when the chorus numbers were recorded for the movie. Either these tracks or the score tracks are the type of highly anticipated extra material that would have made a great additional disk. Trivia for fans of Buffy the Vampire Slayer: one of the cut chorus members was Anthony Stewart Head.

That may sound like I\'m reviewing the album for what isn\'t there, but what I get doesn\'t work. As much as I love the music (which would be five stars if I was rating the original two disk cast album), I am sadden that this incredibly flawed version will be how the general public first sees the material.  Even removing the musical from its past iterations, I can\'t see the movie as anything more than a failed opportunity.