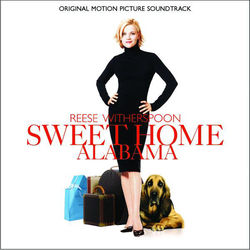 All right, let's go. Jewel? Liked her first record, not so much her second, haven't checked out her new one, but I have this to say: if you're going to cover a classic like "Sweet Home Alabama", lilty-Jewel vocals will not work. Okay? Thanks.

As "cute" as everyone says Sweet Home Alabama is, I think I'll wait to see it when I happen to catch it on HBO or something. I didn't hold my breath when I was given the soundtrack to review - I figured it would have a predictably girly sweetness. It does, by the way; but it's not intolerably saccharine.

Lacking her punky girl attitude and spelling ("Sk8r Boi"? At fifteen that was funny.), Avril Lavigne's "Falling Down" sounds the way I thought the whole soundtrack would: poppy, but not produced to death, some live instruments, but mostly not. You know what, though? I like it! I don't "like it-like it", but I like it. It's a pretty good song and it's a pleasant surprise to discover Lavigne can sing and fairly well at that.

Dolly Parton's "Marry Me" is the funniest and most fun song on the record. It's got her trademark kitsch and its pretty infectious. I'm not sure how it fits into the movie, but it's a fun little departure towards the end of the CD.

Just so you know, I am not a fan of The Calling's cover of "Keep Your Hands to Yourself"; the band pulls it off, but Alex Band's muffled-grit doesn't work. At all. Sheryl Crow gets old-timey with "Long Gone Lonesome Blues" and truly, I had no idea who was singing until I checked the back of the CD case (I generally avoid looking at who does what on a soundtrack until after at least one listen); she does a great job with it.

Now, the highlight of whole collection is Ryan Adams' "Gonna Make You Love Me". I only have Adams' second solo record "Gold" as a guide, but he is one of the better singer/songwriters that I've heard in a long, long time. The song is short coming in at only two and a half minutes, but it's meant for finger-drummin' and toe-tappin'. For real.

All in all it's not a terrible soundtrack, it's just not overwhelming. It's the sort of thing your little sister would like and I meant that in the best possible way.