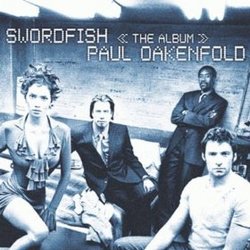 For me, Swordfish was one of the more memorable releases of the 2001 summer box office season.  It was filled with an almost believable and realistic plot, kick ass CGI enhanced explosions and more women in skimpy outfits that I could have hoped my $9.00 would pay for - plus Halle Berry bares her breasts!  Hell, the movie executives had to pay Halle half a million to see her bare skin, so I felt very privileged paying only $9.00.  The next time I complain about the cost of admission to a theater, just say "Halle Berry" and I'll shut up.

Swordfish, the movie, immerses you in the mysterious world of Gabriel Shear (John Travolta) and his extremist views of protecting America's way of life by launching a multi-billion dollar war against terrorist nations.  Gabriel feeds his thirst for power and war by plotting to steal billions of dollars from secret government funds that are locked away behind super-military encrypted networks.  Gabriel uses his beautiful sidekick Ginger (Halle Berry) to help him convince super computer hacker Stanley Jobson (Hugh Jackman) to join their cause.  Stanley is tempted into joining this dark alliance by realizing he can use the millions promised him to win his daughter's custody in a court battle with his negligent, porn queen ex-wife.  Despite having a rather simple plot, there are enough twists and digital eye-candy to deliver an entertaining and noteworthy film.

Swordfish, the album, is nearly not as powerful as the film it was meant to support.  Paul Oakenfold is a professional DJ who has delivered a soundtrack that can't stand alone by itself.  In the movie, the music performs its expected role of fueling the action sequences and building suspense, as any soundtrack should.  This soundtrack fails to be good because there is no memorable theme or crescendo.  The entire album sounds like it was "mixed" during an Ecstasy trip at some midnight rave and belongs on "Dance Hits No.15".  Musical beeps and redundant mixes are present simply because they seemed cool at the time (under a profound chemical influence) and have almost nothing to do with what occurring on the screen.  If it weren't for the never ceasing movie dialogue mixed in with the music you would never know that this soundtrack was from the movie Swordfish.  I found myself skimming over the tracks because I just couldn't stand it any more.   Every time I thought I found a tack that I could use to sum up Swordfish, I instead landed on a bulk of driving notes that filled my head with visions of the vampire bloodbath sequence in the opening moments of Blade.

If you like hopping around to skull-numbing beats with a glow-stick clenched in your teeth, then this album is definitely for you.  If you like motion picture scores that are more traditional and operatic in form, avoid this like soundtrack like the plague.