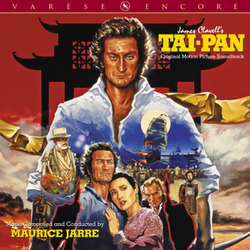 We revisit another great score from 1986 with Maurice Jarre's epic Tai-Pan. Jarre created one of his most powerful and surging symphonic themes for this troubled film of James Clavell's novel about the struggle between Scottish opium smuggler Dirk Struan and the Chinese to maintain control of British-occupied Hong Kong. Bringing the novel to the screen brought its own decades- long conflict, with Hollywood, European and Chinese forces caught in its grasp.