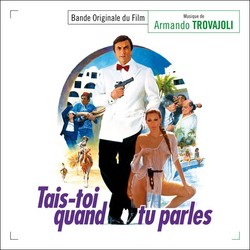 In collaboration with Sugar Music, Music Box Records is pleased to present for the first time on CD the original motion picture soundtrack of Tais-toi quand tu parles composed and conducted by Armando Trovajoli. His score contributes to giving to Philippe Clair's film its dreamlike rhythm, as well as reinforcing its subtle poetry.

Trovajoli affirmed that Philippe Clair's work was more musical than cinematographic. Like a jazz musician in an improvising trance of counter-melodies at once chaotic and absurd, Philippe Clair transgresses with abandon cinematic and comic codes, making of his films a rhythmic succession of delirious situations and dialogues, which no other genre of cinema resembles. This sacrilege of artwork – closer to a pop art approach, or to certain cartoons or examples of slapstick—is translated perfectly by Trovajoli, whose score banishes all forms of classicism and all grandiose conventions, in favour of an original, elegant and "pop" colouring.

Limited to 350 units, this World Premiere CD release has been fully remastered from the session tapes by Claudio Fuiano and includes an 8-page booklet with liner notes by Nicolas Magenham, discussing the film and the score.