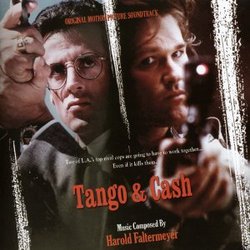 Ah, the 80\'s buddy-cop movies. Sure, we remember the greats, but what about those bizarrely over-the-top ones that came out right around the beginning of the 1990\'s? The Last Boy Scout? Red Heat? I\'d even throw in Cobra, though it came out a few years earlier and there\'s no real "buddy" in it. They always had insanely silly violence and incredible disregard for the law. The movies always ended with our vaguely wounded hero(es) surrounded by flashing police cars outside of some random warehouse/building. Tango and Cash is easily one the craziest ones of the bunch.

Harold Faltermeyer is one of those composers that doesn\'t get mentioned much.
Partially because he hasn\'t really worked much in the last decade; he returned to Europe after this movie. And movies like Kuffs, Fatal Beauty and this one don\'t get much discussion in these circles. He started out with Giorgio Moroder and Donna Summers, so when he moved on to film scoring, he had a strong foundation in synthesizer and electronic pop recordings. Faltermeyer wrote two of the best know rock instrumentals of the 1980\'s (Beverly Hills Cops\' "Axel F" and the anthem for Top Gun). His influence has been a quiet but powerful one. You couldn\'t see any of Hans Zimmer or any of his crew existing without the action-score foundations Faltermeyer made. And multi-player 90\'s fighting games would have no music if it weren\'t for him (you could easily confused "Cash In The Tunnel" for a background track to Streets of Rage).

I am not exactly a big Faltermeyer fan myself; I always felt that Brad Fiedel and others did better job integrating an all-synth score into a movie. To like this score, you have to have a particular love for this sound, and for this type of sound, it\'s is not memorably distinct. Much of the music relies on the style he established in "Alex F" with funky drum breaks, computerized xylophone counterpoints and saxophone and harmonica imitations. Too much of it sounds like disposable music of the time. "Love Theme" sounds like the background to a Sheila E. song, and the "Brother & Sister" theme sounds like a Michael Pare song. The suspense cues are fairly standard ("Stake Out/Set Up/Switching Tapes"). Only a random small track here and there show something unique (like "Slinky\'s Cell" which manages a fragmented music box nursery rhythm to creepy effect).

The album plays best as a nostalgia piece - or a guilty pleasure piece. This is the first time the score has been released (in a limited run), though some tracks have appeared on other Faltermeyer\'s albums. For the time, it was an average score. Nowadays though, it is dated but may have some kitsch value to those interested.