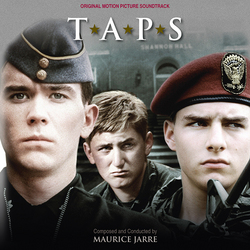 Taps / The Only Game In Town

Tying Taps all together is Maurice Jarre's wonderful score. Many cues are sparsely scored for trumpet, piano and percussion to excellent effect, and the other cues are used carefully throughout the film and help give the film its tension, emotion and texture.

For [The Only Game in Town[], Maurice Jarre came up with a truly great score. Beginning with a lonely trumpet leading directly into an exciting and jazzy "Vegas" feel, leading back to a melancholy duet for sax and trumpet (the film is all about loneliness, connections missed or made, and has a pervasive feeling of melancholy), Jarre's score compliments the movie perfectly.

Taps was previously released on CD on Varese Sarabande as a limited edition that sold out quickly. This is the premiere release for The Only Game in Town—we present all the cues that were usable, about twenty minutes' worth, but, thankfully, it's most of the score and is fully representative of the cues Jarre wrote.