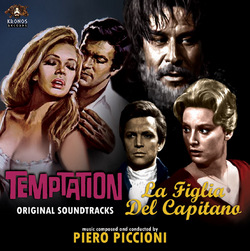 Kronos Records is proud to present for the first time ever on CD two musical gems from the late Maestro Piero Piccioni; Temptation (1968) and [La Figlia Del Capitano[] (1965).

The music on Temptation is beautiful, chilled and sensual. The ensemble plays a lovely blend of jazz and lounge with hints of bossa that make this a very recognizable Piccioni work, an easy listening, chill score for the 1968 film directed by Lamberto Benvenuti and starring Mark Damon and Stefania Careddu.