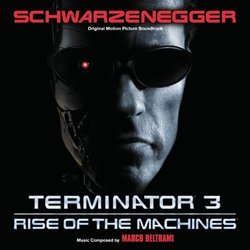 Terminator 3: Rise of the Machines

Review: Terminator 3: Rise of the Machines

Arnold Schwarzenegger is back in full force in Terminator 3: Rise of the Machines, reprising his most famous role as the T-101. T3 is a contrived yet entertaining action film very similar in plot to Terminator 2. Arnold is sent back in time to protect John Connor (Nick Stahl), now 25, from being eliminated by a much more powerful Terminator, the T-X (Kristanna Loken). With the help of female sidekick Catherine Brewster (Claire Danes) and the protection of the T-101, Connor must escape the divisive grip of the T-X to attempt saving the human world from ultimate destruction by Skynet.

The film has some amusingly campy lines and sequences but in general enforces the Terminator storyline which has become a cliché. The score for the film is not a cliché;  it is clearly executed, original and very well done. Released on the Varese Sarabande label the T3 score was composed by Marco Beltrami, known for scoring more horror-related films such as Scream, Mimic, The Faculty, and Blade II. Marco does an excellent job of adding an emotional slant to the film and to its main characters. The original Terminator and Terminator 2 scores written by Brad Fiedel were more underdeveloped than Beltrami’s T3 score. While Fiedel relied exclusively on pounding polyrhythmic drum beats and synthesized effects to accompany action sequences involving the Terminators, Beltrami uses mainly full orchestration along with some synthesized effects to create an entirely different feeling. This orchestration creates a more emotional and complex soundscape for the characters.

Beltrami's theme for the T-X was comprised of heavy staggered beats accompanied by a frenetic strings section playing dissonant notes together. Woven throughout the score, it contrasts well with Connor's them (heard in "JC's Theme"). This theme starts out as a starkly instrumented piece with a tentative sounding introspective string section with slowly building rhythm and instrumentation. By the end of the film, in the track "T3" the theme, becomes even richer with full instrumentation, heavy drums and a less tentative sound. The music parallels Connor’s emotional transformation throughout the film.

Director Johnathon Mostow wanted to separate his music from the music of the previous Terminator movies. He wanted the score for his movie to define his style. Even though Beltrami reinterprets the original Fiedel theme in the closing credits of the film, it sounds very different then the original, more fleshed out, more alive. Which to some degree goes against the musical ideas for the first two films, where the terminators were cold and unfeeling.

The entire T3 score can stand alone, even though it is somewhat difficult for me to listen to this score independent from the movie. Serious film music buffs and Terminator fans will hear in this score a very fine reinterpretation of an already legendary iconography.