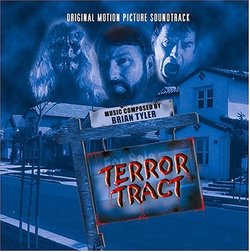 Virtually unknown until his astounding score for Frailty (named by many as one of the best scores of 2002), Brian Tyler hit the ground running in 2003 with three scores released by Varese Sarabande within three weeks in March: Darkness Falls, The Hunted, and Children of Dune - followed by Timeline in the fall. Fast becoming a big name in film music, some of Tyler's earlier works are now being sought by fans and, thanks to La La Land Records, they are becoming available. Terror Tract is one of Tyler's scores that initially typecast him in the horror genre and there are many stylistic similarities between this early work and some of his more recent scores.

The album opens with the breathtaking "Main Title", which has some of the best dramatic writing for brass. The brass section is in full tilt with the theme being passed between the trumpets, horns, and trombones as if they're each trying to play louder than the last in a frantic race. Tyler used a similar writing style for the brass section in Timeline, but with a less harsh feel. Terror Tract is thrilling and suspenseful, yet it is a less common approach to horror scoring. Darkness Falls had a similar feel, which some reviewers referred to as "sizzling". Backed by harsh electronics and trilling strings, both scores slam the listener in the face with sound (in a good way). Unfortunately, where Darkness Falls maintained the fury of the opening titles, Terror Tract falls into mainly filler music for the majority of the album, with few performances of the main theme and none with the same intensity of the first track until the "End Title".

Terror Tract has its moments in addition to the main and end titles where Tyler's gift for chord progressions and orchestrations (aided by composer Christopher Lennertz) shine. The main theme does come back in quieter versions in "Suburbia" and "Father and Daughter", and "The Lake" is a quiet guitar and piano piece that serves as a temporary relief from the suspense music. "Whirlwind of Chaos" has some of the frenetic writing later heard in "The Hunted". "Revenge" and "Searching" feature some interesting moving percussion lines behind the quieter parts of the score. Before the "End Title" returns to the thrilling opening theme, "Head Not Found" takes a quieter, yet tenser tone, similar to Frailty the following year.

Tyler always brings new ideas to the table with each score. His most recent effort in the horror genre, Godsend, is nothing like Frailty, Darkness Falls, or Terror Tract, but a quieter score with chilling vocals. It is interesting to hear some of Tyler's earlier work to see the way his orchestrations and thematic developments have grown. While Terror Tract is not his best work, the "Main Title" alone is worth checking out. I greatly look forward to his upcoming projects.