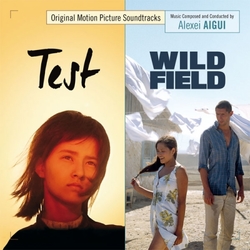 Mikhail Kalatozishvili's, Wild Field (Ispytanie, 2008) takes place in the remote steppes of Central Asia, where a young doctor relocates thinking his fiancée soon will join him... But of course, life has other plans for him. The music for Wild Field is inspired by the location of the filming, filled with ethnic elements and a passionate song interlude, performed by Elena Sergeeva.

Aleksandr Kott's Test (Dikoe pole, 2014) also takes place in the Russian steppes. This picture, completely free of dialogue, tells the tale of a father and his gentle, beautiful daughter who live a quiet life until two young men fall for the girl. The subtle musical accompaniment once again finds its inspiration in the sound of the steppes, in particular, the voice of Buryat singer Namgar.

The 8-page booklet features liner notes by Gergely Hubai, discussing the films and the scores, based on an original interview with the composer.