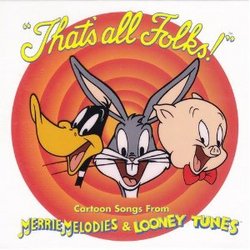 Like most people my age, I grew up watching a lot of TV. Probably too much. Especially on Sunday mornings, when I would be sure to tune in the old Bugs Bunny cartoons that they ran on Channel 5 in New York. I've always loved cartoons, and I always will. I'm even studying animation as we speak, trying to learn how to do the magic stuff that those wacky Warner animators cranked out for so many years. I'm also a musician and have been for most of my life – and I always loved the cartoon music, punctuating the frantic action with booms and trills and blares and sometimes, sweet passages from the classics.

Well, there's a whole lot of that on this CD set, and it makes me very happy (say that like Droopy). "That's All Folks" contains a marvelous array of cartoon tunes with actual singing vocals – as opposed to the mostly orchestra-only scores - from a number of shorts dating back to the 30's. Ahh, the Swing Era. Gotta love that horn-playin' jazz, yes sir.

The first of this two disc set opens with the complete soundtrack to "Book Revue," One of Bob Clampett's earlier directing efforts, which features Daffy Duck as what looks like a Hollywood zoot-suiter, curly and blond like Danny Kaye. You know that when a toon contains both bits of "Moonlight Sonata" by Beethoven and a Daffy rendition of "La Cucaracha", it's a wild one. It starts with the familiar Looney Tunes theme song – did you know it's called "The Merry-Go-Round Broke Down"? I didn't… and later on Disc 2, you can hear Daffy sing the words to it in "Daffy and Porky: The Oddest Couple."

Next comes "Bugs Bunny's Greatest Hits". Now, to me, the Bunny is tops, without equal in the cartoon world. So, you can imagine how hearing my favorite Bugs tunes (many of which I memorized long ago) bubbling out of my CD player – like "Easter Rabbit," "Oh Susanna" (with Elmer Fudd), his hilarious square dance direction on "Square Dancin'," the incomparable "The Daughter of Rosie O'Grady," and of course, "What's Up Doc?" You know, I've always thought that Mel Blanc was one of the most talented actors ever, and by golly the man could sing, too – in several different voices and ranges – and then shoot right back into the speaking character. My only complaint about this CD comes in this series; the version of "Someone's Rockin' My Dreamboat" isn't the version I remember best; it's quiet and subdued. The one that rings through my head is much more boisterous. Oh well. You can't have everything.

Disc 1 then offers the full soundtrack to "Back Alley Oproar," with Elmer Fudd and Sylvester, followed by "Choral Classics", a number of ensemble vocal performances from various cartoons, including the famous "Dover Boys at Pimento University" – remember Tom? Remember Dick? Remember Larry? And the instantly familiar "Boys of the Chorus" – "but now we have to go-ooo!" Then comes "Swingin' Singers," which is just what it sounds like; a medley of 26 cuts in the swing jazz style, with takes on Calloway, Crosby, Durante and Sinatra. Last comes the full soundtrack to "Katnip Kollege."

Disc 2 opens with Chuck Jones' masterpiece, his magnum opus if you will, the thundering "What's Opera, Doc?", featuring themes from Wagner's Nibelungen Ring opera – one of the most well-known cartoons ever. I mean, come on: "Kiww da Waa-bit, Kiww da Waaa-bit, Kiww da WAAAA-bit!"? Probably Elmer's most memorable, shining moment, as he calls down the storm clouds and thunderbolts with his spear and magic helmet. Sheer geeeenius (say that like Wile E. Coyote). This one starts with the familiar Bugs Bunny theme music – did you know it's called "Merrily We Roll Along"? I didn't know that either. More trivia for the toon-head!

Then comes the aforementioned "Daffy and Porky" series, with 17 cuts including Porky stuttering thru "M-m-m-moonlight B-b-b-bay," as well as Daffy's chestnuts "Wild About Harry" and "Barber Of Seville" and even "Aloha Oe" rendered in the inimitable Daffy style.  That is followed by "Looney Tune Interludes," better than two dozen cuts from all over the Warner toon universe. Highlights include "Camptown Races" and "Old MacDonald" sung by Foghorn Leghorn (Mel), "Putty Tat" by Tweety (Mel again) and "Atsa Matta For You" by Charlie Dog (Mel again, sounding like some of my neighbors from back in Jersey).  Finishing it all out are the complete soundtracks to the vintage cartoons "Have You Got Any Castles" and "Three Little Bops," plus "Musical Moments," another long series of cuts from many different cartoons. These I'm not so familiar with, but they're still excellent.

Along with the music, another treasure of this collection is the booklet within – in fact, part of the hardcover book jacket in which the CDs are bound – containing loads of information and reproductions of some fairly rare artwork. There are 100 pages of things I didn't know about cartoons in here, in-depth examinations of the scores, anecdotes from the principals involved, and descriptions of the cartoons from which the songs are culled. The songs would be enough; this is definitely a major bonus.

The overall sound quality is remarkable, especially considering that many of these cuts were recorded before magnetic tape existed – they were cut live to a wax disc! No retakes, folks, just true talent and magic. These scores are pretty much brilliant all the way through, created by composers like Michael Maltese, Milt Franklyn, and of course, Carl Stalling, who is responsible for about 75% of the music in this collection. To put these writers' talents in perspective, the soundtrack and musical score of cartoons (in America) is nearly always recorded before the actual animation process is begun – meaning that the animators work to the soundtrack and time all their art to the cadences of the music. Imagine how these scores must have inspired the artists to create images that were worthy of them; marvel at the knowledge that the production schedule on these shorts was only about 12 weeks from start to finish! All these creators worked like madmen, even straight through World War II, to produce these cartoons, some of the most cherished popular works in America (most of the live-action films they preceded are lost to oblivion) – and are most distinctly American.

Can you tell I really enjoyed this? If you like cartoons, you will too.