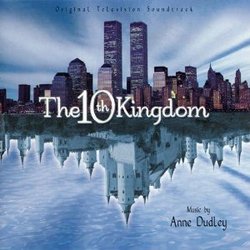 Hallmark Entertainment has produced many impressive miniseries lately. From such productions as Gulliver\'s Travels, The Odyssey, Merlin, Animal Farm and Alice in Wonderland, music has always played an important role. So when they decided to create a 10-hour long miniseries entitled The 10th Kingdom, it was apparent that they would need a composer willing to take on the gargantuan task. Academy Award winning composer Anne Dudley decided she was up for it, and tackled the \"mini\"-series head on. The result was a varied and enjoyable score that helped make the mediocre miniseries somewhat palatable.

I\'ll be honest. I couldn\'t watch all of the miniseries. It was just too long, and I found that while most of the effects were cool to watch, they didn\'t hold the film up to the same level of enjoyment that Merlin or Gulliver\'s Travels had. But the score by Dudley at least brought it up to a somewhat tolerable level. The cues on the album seem to be a combination of \"library\" cues and original underscore. By \"library\" cues, I mean that Dudley appears to have written music that was used multiple times in different locations in the film. (You don\'t really think she wrote over 9 hours of music, right?)

Beginning with \"The 4 Who Saved the 9 Kingdoms\" showcases Dudley\'s ability to write a sweeping epic-caliber main title theme. Throughout the score she shows off different scoring abilities. With \"Six Glorious Wishes\" she plays off a circus-type \"oompah\" motif that is somewhat reminiscent of Elfman\'s and Goldenthal\'s work; there is plenty of whimsy in this cue. Calming and emotional, \"Flowers Only Grow Where There Are Seeds\" is a great example of Dudley\'s intimate work.

Some cues contain a mixture of synth effects and orchestra, and Dudley plays off of that rather well. A rather deliciously dark cue, \"Blood on the Snow\" emotes plenty of suspense and dread. \"A Gypsy Incantation\" makes great use of a solo violin backed by the full orchestra in a melody that seems to have plenty of Slavik inspiration. \"The Days of Happy Ever After Are Gone\" makes good use of the main theme, but with a much sadder tone. Also included on the album is the (rather short) song \"Wishing on a Star\" performed by Miriam Stockley. The song is performed with plenty of energy, and it\'s too bad that it\'s really short - a longer version is definitely in order.

The album runs almost 55 minutes in length. Short, considering the amount of music in the full miniseries, but as many cues were probably repeated, this is a well-rounded album that showcases Dudley\'s abilities quite adequately. Unfortunately, the chances of you buying this album without having seen the miniseries is slim - but if you enjoyed Dudley\'s works in her feature films, you might want to look into picking this one up.