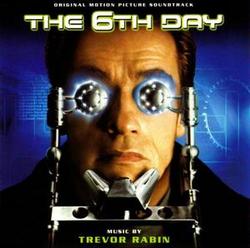 It is unfortunate that Arnold Schwarzenegger - whose name alone would almost guarantee a $100 million dollar box office - seems to be struggling at the box office these days. With the dismal failure of End of Days, Arnold went back to his roots in the sci-fi thriller The 6th Day. Comparisons to Total Recall aside, the film was fun, although the general populous seemed to disagree. So far the $80-million film has only taken in about $35-million - and has already dropped off the top 10 list. Nonetheless, the music in the film was composed by Trevor Rabin, who provided the right amount of tension, action, and heart.

Beginning with "The Sixth Day", one of the many strong themes in the score, makes an appearance with a slight variation to give it an almost "otherworldly" (almost Middle-Eastern) flare. With powerful hits, the highly optimistic cue ends sounding (dare I say) like part of a Yanni concert. Thankfully, Rabin turns on the futuristic creepiness with his next cue, "In The Beginning…", which opens the film. It's a creepy electronica / orchestral mesh that has a great bit of musical candy that reminded me a bit of John Harrison's main piano theme to Creepshow. This motif shows up throughout the score, and works quite well.

Evoking memories of the strong theme Rabin wrote for Armageddon is the main theme heard in "Adam's Theme". The action cues ("The Rescue", "The Roof Top") allow Rabin to return to the element he worked comfortably in with Con Air and Deep Blue Sea. They're filled with high-octane percussion and that special Zimmer-esque brassy synth that I first recall hearing in some early Vangelis scores. All in all, rocking fun. In "The Kiss" we get a nice taste of the more tender human side to "Adam's Theme", and it helps round out the sound of the album nicely.

As far as scores go, this one seems to be a mesh of Deep Blue Sea and Armageddon. There are a few motifs that play out very nicely, with the gaps filled in with some enjoyable action. It might not be completely groundbreaking, but it's certainly much better than Gone in 60 Seconds, and I think it's worth a listen.