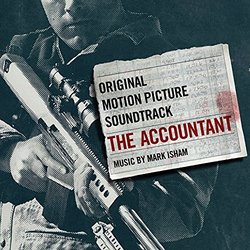 Dark and mysterious, The Accountant is a thriller starring Ben Affleck, J.K. Simmons, Jon Bernthal, and Anna Kendrick. It chronicles Christian Wolff (Ben Affleck), a math savant with more affinity for numbers than people. Behind the cover of a small-town CPA office, he works as a freelance accountant for some of the world's most dangerous criminal organizations.

The score, composed by Mark Isham, reflects the film's emotional content and hazy atmosphere. The musical elements in each cue match the storyline and emotional pacing of each scene wonderfully. The harmony, melodic gestures, and orchestration was minimal, but just. Throughout each track, the musical tone well matched the muted colors and personality of each character.

Providing music which fit the atmosphere of the film is what Isham did best in this score. Isham produced what one may consider a palette score. This is when a composer selects an array of "colors" which he would then pick and choose from for each cue. From this palette, he painted a simple picture focusing on texture. One of the textures which was used regularly, was a high sustained string note. This long, soaring timbre contributed to the clouded mood and emptiness of this film.

There is no clear use of theme, but there are a few tracks that have similarities to one another, as shown in "The End Of Solomon Grundy" and "Were You A Good Dad?". Even in these examples it is hard to recognize clear connections between motivic gestures. On the other hand there are textural connections heard in "The Trial Of Solomon Grundy" and "The Accountant". These two tracks demonstrate techniques similar to minimalist music: repetitive pulse, short motivic statements, and neutral harmonic language. Other composers such as Michael Nyman (Gattaca) and Philip Glass (The Hours, Kundun) use this style of music quite often.

The minimalist style is most shrewdly used in "The Trail Of Solomon Grundy", during a flashback to Wolff's childhood. The cue progressively increases its vigor as Wolff is about to test his father's combat teachings on a group of bullies. The cue climaxes as he exits the car, learning that in the real world, different scares people. Many musical elements are used in this cue to create a whirlwind of emotions. There are two textures that combat one another in this scene, the repetitive, low string pulse and the high 'sad' string melody which can be heard in "Were You A Good Dad?". Flooded with emotions, the listener begins to feel anxious and, at the same time, full of intensity. As the fight sequence ends and the flashback comes to a close, a piano enters tenderly, choosing one note at a time. As Wolff writes a goodbye letter and slowly closes the door, the piano avoids cadential closure. Isham prolongs the tonic until the exact moment where the transition cadences with the ethereal strings floating above. This track specifically highlights the craftsmanship Isham carries. The overall atmosphere, pacing, and synchronization of hit points is truly outstanding. Without a doubt, this track stands out as one of the best in the film.

The track "The Accountant" stands out differently from that of the previous. In contrast to the rest of the music and overall mood of this film, this cue provides a spark of energy. The long melody played in the strings soar over the galloping piano and synth pulse to create a very cheerful and fulfilling mood, even ending on a major chord. Sadly this texture, melody, and optimism is heard only once throughout the film. This is one of the only moments where we see Wolff's true genius with numbers and it is clear what Isham was intending by using a different sound. This musical difference seemed all too sudden and unwelcome, creating an imbalance in the overall score. Unfortunately, this color never returns and leaves the listener only wanting more optimism.

In the end, this soundtrack exhibits many high and low points in its effectiveness. The music fits the film very well and does not cause the listener to feel annoyed or disrupted by it. On the other hand, the score does not pop off the page as something unique or truly special. Many of the sequences and underlying pulse music was very basic, losing musical connection. In comparison to some of Isham's lighter scores (Dolphin Tale (2011) or Miracle (2004)), The Accountant shows a darker side more similar to Crash (2004) and In The Valley of Elah (2007). Nevertheless, the score that Isham composed resonated with the style of this thriller quite well.