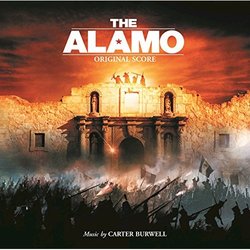 To Texans, the story of the Alamo isn't history. It is mythology. The original historical events have transformed and the tales of its heroes and villains are now legendary. Though film versions of this tale number in the dozens (primarily as TV movies), the most popular version remains the 1960 John Wayne movie with the Duke starring as Davy Crockett. Any new telling of the tale would clearly have to contend with that cultural baggage.

This latest version's goal was to humanize the real story behind the myth. Originally to be directed by Ron Howard and starring Russell Crowe after A Beautiful Mind won the Oscars, Howard departed from the project when he was not allowed to make the R-rated western he was desiring - which he would soon make in The Missing. Fresh from their success on The Rookie, director John Lee Hancock and star Dennis Quaid took over the project. Costs mounted on the project (over $100 million) and the movie was delayed from an Oscar contending winter release to a pre-blockbuster season spring release. With such signs of a troubled production, it is not much of surprise that the movie died on arrival at the box office.

But you didn't come here to read about how much money it made, how is the music? Hancock brought Rookie composer Carter Burwell in to write a score in tune with his humanistic approach to the subject matter. Burwell keeps the music initially low-key in contrast to the epic sweep of the picture. He emphasizes the fiddles and the string section to drive the melody. The early tracks ("El Bexareno"," La Zandunga") have a delicate Mexican favor that thankful does not scream, "Look at me! I'm ethnic!" In fact the whole first half of the album flows along quite elegantly. Burwell has always excelled with moody, introspective music. When he strays from his strengths is when his work suffers.

Once conflict arises, Burwell supplements pomp to the proceedings but it is non-specific and meandering. The series of tracks unimaginatively named "The Battle of the Alamo" (parts 1 through 6) is a series of brass-based cues with rather repetitive snare drum counterpoint. And his sweeping theme introduced in "What We're Defending" comes off as an imitation of the theme from Rob Roy. None of the music is bad, but it is more of the same, which leaves the listener with a result that is nothing more than typical.