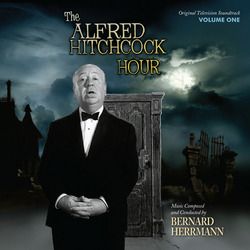 Our celebration of Bernard Herrmann's 100th birthday begins with one of the most important and exciting Herrmann releases in many years! After a wait of nearly 50 years since they were composed we offer a 2-CD set featuring eight never-before-released scores by Bernard Herrmann for the classic television series The Alfred Hitchcock Hour.

The hour-long Hitchcock episodes allowed Herrmann's music to really take the form of mini-film scores unto themselves. And Herrmann wrote 17 of them for the series!

This premiere release features the classic 8-bassoon Herrmann arrangement of Gounod's "Funeral March Of A Marionette" along with the complete scores A Home Away From Home, You'll Be The Death of Me, Nothing Ever Happens In Linvale, Behind The Locked Door, Body In The Barn, Change of Address, Water's Edge and The McGregor Affair. There's action, romance, macabre humor and lots of classic, chilling Herrmann suspense.

Featuring nearly 2 1/2 hours of Bernard Herrmann, this is a landmark release and an absolute must for all fans of the composer's work.

Our Bernard Herrmann festivities will continue on July 2 with a thrilling concert tribute to the composer hosted by Robert Townson and conducted by Diego Navarro at Fimucité 5 in Tenerife!