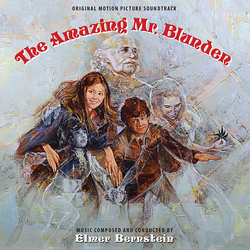 Intrada's latest release is the much sought-after Elmer Bernstein score to the 1972 ghost story, The Amazing Mr. Blunden. Bernstein composed some 40 minutes of score for the film, focusing on the more intimate and sometimes regal aspects of the film's emphasis on the children from different eras and the British setting. The score is a kind of kindred spirit to his score to To Kill A Mockingbird some 10 years earlier. Bernstein wrote a score that supports the story at every turn, contrasting isolated full orchestra moments with passages of almost chamber-music intimacy for scenes involving the children and Mr. Blunden. The lovely melodies he created and the harmonies he used to support them achieve maximum affect - often with a minimum of resources.

The master elements used for this premiere soundtrack release, long considered an elusive treasure waiting for discovery, were finally located and fortunately had been preserved in beautiful condition. The original score itself is complete and was vaulted on two first-generation rolls of Ľ″ tape, mixed down by scoring engineer Richard Lewzey at London's Cine-Tele Sound Studios (CTS) in October 1972.

The film is based on The Ghosts by distinguished British author Antonia Barber. The story of The Amazing Mr. Blunden centers on two pairs of children from different eras brought together by aging solicitor Frederick Percival Blunden. As the film opens, Lucy and Jamie Allen are living with their recently widowed mother. Mr. Blunden asks them to be caretakers of an unoccupied country estate while his firm tracks down the rightful owners. Mysteriously, he asks the children if they would be afraid if they saw ghosts, and they assure him they would not. The reason for his question becomes apparent enough when the Allens arrive at the derelict house and discover that it is haunted by the ghosts of two children, a boy and a girl much like themselves, who had lived there 100 years ago: Sara and Georgie Latimer. Sara and her brother plead with the Allen children to drink a magic potion and come with them back in time to help them escape a terrible fire that will otherwise kill them—a fact Lucy and Jamie confirm by finding their tombstones in a present-day church graveyard.