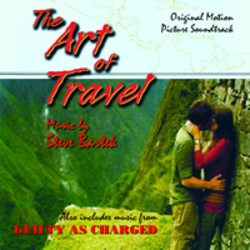 The Art of Travel / Guilty as Charged

BUYSOUNDTRAX Records presents the original soundtracks to The Art of Travel and Guilty as Charged, featuring music composed by Steve Bartek.

In 2008, the composer was approached by the producers of The Art of Travel to score the film. By coincidence, Bartek had been building his own home recording studio and thought the project would be a great opportunity to show he could create and record a score by himself, in his own studio. The end result is a vibrant and contemporary mix of electric guitars, ethnic instruments, exotic percussion and string quartet.

To score Guilty as Charged, the producers were looking for a composer who would play it straight and not acknowledge the quirky beats of the film's dark humor. Once director Sam Irvin heard the synth mock-up of the score, he pushed the producers for enough funds to pay for a full orchestra session, recorded in Seattle. Performed by a sizeable orchestra of around 65 players, the end result is a wonderful Bernard Herrmann pastiche, the complete antithesis of the composer's work on The Art of Travel.

This represents the first album release of the composer's work. The booklet includes liner notes by author Randall Larson, including input from the composer. It is a limited edition release of 1000 units.