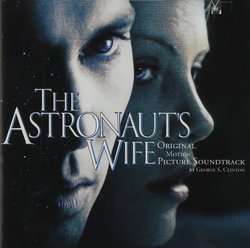 George S. Clinton, hot off of Austin Powers: The Spy Who Shagged Me, went right into another New Line film, The Astronaut's Wife. This film allowed George to flex his dramatic and suspenseful scoring talents. Right off the bat, you can get a sense of the score. Very tense strings and atmosphere quickly move into a very calm motif with piano and strings, highlighted by a solo vocalist. Then synth bass quickly comes in and overpowers it (almost like it did in Goldenthal's Alien 3 opening), leaving us with atmosphere and a distortion effect that is quickly joined by the orchestra and percussion for a large climax. This is certainly not a happy little score. This is a dark and evil score.

There are generally two parts to the score - the soft choral and piano bits, and the harsh, cold synth bits. In his interview with SoundtrackNet, Clinton told us that he wanted to use the two opposites to represent the characters - and it works very well. The juxtaposition works rather well, as in "Meeting", where there is a light choral backing to some rather tense, energetic strings.

Many cues use a lot of percussion, such as "Positive", which reminded me a bit of Clinton's great work on the Mortal Kombat films, where percussion was integral to the film. As I have indicated in the past, I'm a sucker for choral work, and there are plenty of great dark choral moments in this score. Enough to make me want to listen to it more than quite a few times.

Overall, this is rather enjoyable score, and the mixture of two drastically different types of scoring works well both from a listening standpoint, and a film music standpoint. The film didn't do very well at the box office, and might have more of a life on video. The album is released through Sire Records, and it might be hard to find. But I would certainly recommend going through the effort to get this score if you enjoy dark suspenseful music.