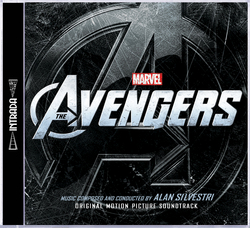 For the 2012 Marvel Studios release The Avengers, composer Alan Silvestri returns to duty following his Captain America: The First Avenger (2011) score. Building on his style established for the earlier film, Silvestri broadens beyond just one super hero to an entire team. This large-scale special-effects extravaganza called for music that is equally large and dynamic, armed with themes, action and thrills. It features 80 musicians and in the words of Joss Whedon, "Alan has provided a score that is so specific, so narrative-based, but still has the undeniable power and fluidity of those more diffuse accompaniments. You can hear the themes, the moments...and just bathe in the greatness." While Silvestri's theme for Captain America returns, he also introduces a host of others, including one of the score's highlights—the theme for Black Widow—introduced as a lonely, plucked, theme with an eastern European flavor to define this character.

For this release, Alan Silvestri and David Bifano produced an album featuring 75 minutes of score on this exclusive CD release from Hollywood Records and Intrada.