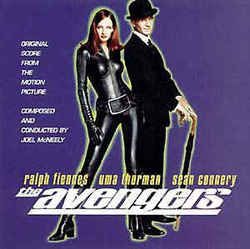 It is a shame that one of the more enjoyable scores of 1998 should be attached with one of the worst films of 1998. Joel McNeely's score for The Avengers was truly a gem of a score that might have gotten buried underneath all the negative publicity associated with the film, and the over-marketed "music inspired-by" pop-album, which basically had nothing to do with the film aside from the cover art. Enter Compass III Records, a new label headed by renowned Music Supervisor Randy Gerston. Compass III released McNeely's score on CD, and it is a good thing they did.

A very thematic score, the opening title to The Avengers slowly builds to the main theme as a montage of images flicker onscreen. The breathy whistle playing a secondary theme in a minor key provides a suspenseful, ominous feeling, which builds up to the big brass phrasing which comprises McNeely's main theme. There is a slinky muted trumpet theme for Emma Peel, a chipper piano and strings piece for John Steed, and dark organs and that whistle represent Sir August DeWinter's theme. Some of the music feels very James Bond-ish in its orchestration, which may not come as a surprise since the parallels to The Avengers and the James Bond films are certainly present (although not necessarily obvious).

The action-heavy track, "Chasing Teddy Bears" is a wonderful example of the action music in this film. Although sometimes a bit Stalling-esque when scoring directly to the action onscreen, this track utilizes the main Avengers theme and some slight variations on it in different ways to represent the multiple chases occurring on screen. Another track of note, "Flight of the Mechanical Bees", showcases McNeely's classical background as a unique homage to the fast-paced (and very impressive) string work in "Flight of the Bumble Bee" works its way into the score, along with synthesized percussive effects. Finally, another great track is "Avenging Crimes", which features a very strong versions of almost every theme in the film, encased in some great action orchestration. As much of the music is thematic, it is not uncommon to hear combinations of themes depending on who is present (or what is happening) in a scene.

Again, it is too bad that The Avengers ended up as a film with many problems. But McNeely's score shone through, and is one of the better scores from 1998. At a running time of almost 60 minutes, this is a very comprehensive release, and Compass III looks like they will be releasing many high quality releases in the years to come.