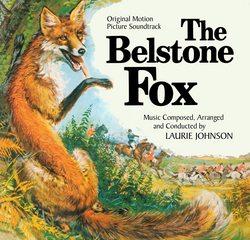 Dragon's Domain Records, to be distributed through BSX, presents the world premiere soundtrack release of The Belstone Fox, featuring music composed by Laurie Johnson for the 1973 drama.

Laurie Johnson's score is largely centered on a single, primary theme, favoring the oboe accompanied by light strings, which is used throughout the score in a diversity of arrangements. The theme is a grand and luxurious melody, instantly memorable, nicely opened up from its initial solo oboe performance into a choir of violins augmented by elegant horn phrases. One of the highlights of the score is The Belstone Hunt, a lengthy six minute plus cue where the composer gives the orchestra a full workout as they perform the exciting, aggressive and ultimately tragic music for the hunt.

The only release of the soundtrack album for The Belstone Fox was a gatefold vinyl album from Ronco in England in 1973. Surprisingly, its engaging main theme was vacant from any of the many compilations of Johnson's music until 2009, on a 2CD set now well out of print. Dragon's Domain Records is excited to celebrate Laurie Johnson's film score with this world premiere compact disc release of the original soundtrack album, remastered from the best elements available by James Nelson at Digital Outland. The booklet includes liner notes written by author Randall Larson.