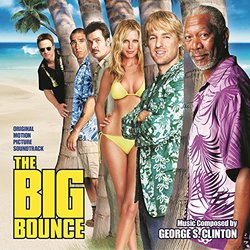 An early 2004 release, the season being the usual "low tide" arena for theatrical films, The Big Bounce bounded in and out of the multiplexes before most people were even aware of its existence. It may have been the fault of poor marketing or a lackluster release season. Its cast was highlighted by the easy charm of Owen Wilson and the stalwart presence of both Gary Sinise and Morgan Freeman, plus was based on a well-regarded Elmore Leonard novel of the same name (and there was already a film version out there), but most critics felt it just failed to make any impact. In the wake of all this, there is at least an album release by Varese Sarabande of George S. Clinton's pleasant score.

The film's setting is the sun-kissed beaches of Hawaii and thus Clinton rolls out the appropriate exotic Hawaiian musical trademarks, bolstered by sax, piano and strings in a lighthearted, frothy mix. The tone is as laid back and worry-free as Owen Wilson's surfer character, yet with a healthy dose of mischievousness. In other words, do not expect any sudden outbursts of danger or urgency, other than a few low key sneaking around type cues ("Con", "Show"). The pleasant demeanor is maintained throughout the 35 minute album length, comprised of short cues, some seemingly combined into single tracks. The persistent percussion keeps the pace up tempo, but this can lead to sense of sameness from track to track, with there being no real standouts and the individual parts perhaps not equal to the whole.

The "Main Title" is a quirky, syncopated tune, quite infectious, beneath an unassuming, sighing theme passed from the woodwinds to strings and brass, all embellished by ukulele and vocal outbursts. "Better Not" and 'Bitches" continues the tempo and the quirky flavor with sax, bassoon and clarinet highlighted. A mellower theme appears in the second half of "Swimming", a rolling bongo rhythm supporting the piano in an easy-going jazz type comment. This theme is also reprised in "Truth", "Black Sea" and "Kiss For Luck", adding a nice bit of contrast to the more lighthearted elements of the score.

Otherwise, the tracks focus on the Hawaiian percussion, playful strings (bowed and pizzicato) and woodwinds and always retaining that up temp rhythm of the islands. There is bit more of a driving intensity to the tracks "Glass Jaw", with its open horn chords, and "Keiki Vista", with its infectious reprise of the main theme. Overall, I think a little bit of this score goes a long way and by the halfway mark Clinton has said pretty much said all he can with the musical vocabulary for The Big Bounce.