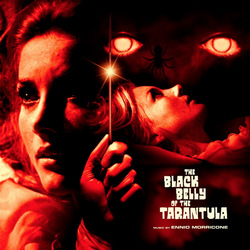 Death Waltz Recording Company in conjunction with Pentamusic and CAM records is proud to bring soundtrack fans a huge classic of Italian horror. With music by one of cinema's greatest composers, Ennio Morricone, Paolo Cavara's La tarantola dal ventre nero is considered one of the best gialli ever made.

Morricone's score is equally frightening, though you wouldn't immediately believe it. The initial melodies of the score conjure up memories of the hits of Serge Gainsbourg, with an upbeat keyboard riff mixed with the breathy and seductive vocals of Edda Dell'Orso, and there's some jazz fusion along the way. But from there it starts to spiral and spiral into the unknown, with disquieting atonal sounds, creepy insectoid strings, stabbing percussion. The mix of an unhinged piano and drums feels like the buzzing of the wasp, and the music gets so uncomfortable you feel paralyzed—with fear—and that's when it really starts to terrify you. Such is the power of maestro Morricone and La tarantola dal ventre nero.

Gatefold version is strictly limited to a one off pressing of 500. Normal retail edition pressed on black vinyl housed inside a single pocket jacket.