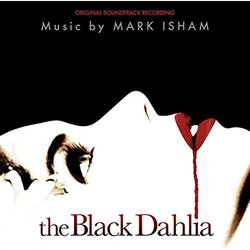 When it was said that James Elroy\'s fictional novel The Black Dahlia would be made into a feature film by Brian De Palma, my interest was piqued. De Palma, who in the past had brought us such films as Scarface and The Untouchables had seemingly lost his spark with his recent films, Mission to Mars, Snake Eyes and Femme Fatale. However, the idea of him helming a noir murder mystery seemed like a good match. Coming on board to score the film was Grammy-winning trumpet player and composer Mark Isham. The film itself starts out alright, but as things progress and the mystery deepens, the far-fetched plot twists and seemingly random leaps of logic make the whole thing fall apart. Isham\'s score has strong themes and a solid textural palette. It\'s a jazzy noir-infused score that heralds back to the black-and-white days of Bernard Herrmann, David Raksin, and Leonard Bernstein\'s On the Waterfront, with a splash of Jerry Goldsmith. In the film, the score gets lost amidst the convoluted storyline, but truly shines on the soundtrack, making it a highly enjoyable and solid listening experience.

The main Black Dahlia Theme is heard on solo trumpet in "The Zoot Suit Riots", but heard in full played tenderly in "The Dahlia". "The Two of Us" features the main Love Theme, which will rear its head multiple times throughout the course of the listen. It\'s firmly placed in the late 1940s, with lush string backings. His theme for the lead character Bucky (Josh Hartnett) is a melancholy one usually performed on solo trumpet. ("Mr. Fire vs. Mr. Ice", "No Other Way", "Nothing Stays Buried Forever"). Isham\'s occasional use of a synth theremin (also heard in "Hollywoodland" and "Men Who Feed on Others") lends an otherworldly characteristic to the score, but doesn\'t ever feel out of place. A theme for Madeline (Hillary Swank) has a sultry quality to it, with an ascending climactic moment that explodes with all the richness of a noir period film.

There is plenty of action as well, and Isham\'s influences are clearly John Adams and Jerry Goldsmith in that regard. It would be easy to say that The Black Dahlia leans a bit heavily on L.A. Confidential, but Isham pulls beyond the trap of "temp-love" and writes some exciting moments. "Hollywoodland" is a good track with lots of various rhythms and melodic phrases. Post-modern phrasing and energy can also heard in "Men Who Feed on Others", "Super Cops" and "Death at the Olympic".

The score runs under 50-minutes in length, but the solid themes and musical storytelling that Isham has achieved allows the score to be elevated above the very material that it was written for. In many respects, The Black Dahlia is a score to listen to while reading a noir mystery novel. It\'s unfortunate that the film didn\'t match the high quality of Isham\'s work. 2006 has been an exceptionally busy year for Isham, but it\'s very easy to say that his score for The Black Dahlia will stand out as one of the best he\'s done, and is a no-brainer for film score fans. Pick this one up - you won\'t be disappointed. One can only hope that - like James Newton Howard\'s Lady in the Water - the music isn\'t forgotten when the film fades from memory.