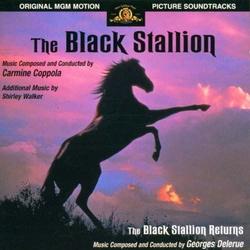 One film I remember watching as a child was The Black Stallion, Carroll Ballard's beautifully told tale about a young boy Alec (Kelly Reno) and the Arabian stallion he befriends, and trains.  Composed by Carmine Coppola, the music in the film ranges from a lyrical main theme, to sparse minimalism, to ethnic percussion, and dramatic underscore.  The sequel to that film, The Black Stallion Returns, featured a more sweeping yet equally lyrical score by Georges Delerue.  Recently, Prometheus Records released both scores on one album, and while not "complete scores", they do a very good job of representing the music from both films.

Starting off with Coppola's score to the first film, it's interesting to note that he wasn't the only one providing music for this film.  Veteran female composer Shirley Walker actually wrote additional cues, as did Nyle Steiner, Bill Douglass, Kenneth Nash, George Marsh, and Dick Rosmini!  The sweeping lyrical melody in "Theme from The Black Stallion" is notable, and has a quasi-1950s underlying bass sequence (similar to the work of Angelo Badalamenti).  The isolation of being stranded on an island is made clear with the minimal use of instruments - most notably a flute - in "The Island", and then again in "First Feeding".

As the score progresses, the orchestration increases, and "The Ride" is an exciting cue that both Coppola and Walker collaborated on.  The use of a cymbalom in "The Legend" and "The Rescue" remind us that this is an Arabian horse, and a dark Middle-Eastern tune  reminds us of the horse's past in a few of the cues as well.  A tender rendition of the main theme is heard in "Campfire", and more dramatic underscore finishes up the film in "Henry" and "Flash Back & Winner's Circle".  "In Training" is a nice banjo/guitar piece performed by Dick Rosmini that adds a touch of bluegrass to the album.

The score to the follow-up film, The Black Stallion Returns is also represented on this album.  Starting off slow, but building to a sweeping theme, "Alec and the Black Stallion" allows us to hear that Delerue's score is going to be significantly different than Coppola's.  Where Coppola's score contained many intimate cues, Delerue's is more traditionally scored, taking advantage of the orchestra where possible.  Certainly there are some quiet moments ("Raj Comes Home", "Together Again"), but there are also more action-oriented cues as well.  "Meslar: Desert Hero" is a pounding cue, laden with staccato brass hits - then it calms down into a more introspective variant on the main theme.  The best bits of the score seem to be those that use this main theme, but Delerue's work overall is successful in achieving a sonic clarity that I felt was partly lacking from the previous score.  It just felt fleshed out more - perhaps it's because only one person wrote it?

While both of these scores are different in their own way, they both effectively bring the saga of The Black Stallion to life.  The informative liner notes written by Randall D. Larson (of Soundtrack Magazine) and Robert Dalva (director of The Black Stallion Returns) shed some light on the music process for the film.  Running a solid 65-minutes, this album is available at http://www.supercollector.com/.