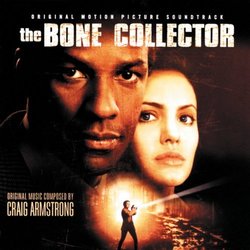 The Bone Collector is a film that has been described to me by a friend as Rear Window meets Silence of the Lambs. With plenty of suspense and tension to go around, this film required a score that could be atmospheric, moody, and have a good theme (as all movies should have). To that end, Craig Armstrong was hired. Armstrong had previously written additional score for Romeo + Juliet, and this year alone he has composed music for three films, including The Bone Collector.

Starting out with a great theme for New York City, entitled appropriately, "New York City", a piano sets the theme, and is quickly followed by the orchestra, which really highlights the dark underbelly of the city. Throughout the score, we will hear this theme played in different forms. "Taxi Ride" presents us with some suspenseful scoring, building to a tense climax. Another theme is introduced to us in "Amelia's Song", which provides us with a slightly ominous tune. "Rhyme And Amelia's Love Theme" contains a very beautiful piano piece, and "Mackenzie" contains some very interesting synth flange elements and added "vinyl crackle" effects.

The last few tracks showcase Armstrong's ability to mix orchestra with synth rhythms and percussive beats. A chorus even comes into play a few times, which always works well for me. In fact, "The City Awakes" is almost entirely a chorus without instruments. The final track, "New York City (Orchestral Version)" is the exact same as the opening title - but without the synth rhythms and effects. It has the same music, but a completely different feeling, and is a great example of how rhythm (in addition to melody) can affect emotions from music.

The Bone Collector has been compared to Silence of the Lambs, and the music, reflects that tone - many moments of this score seem to pay homage Howard Shore's dark brooding style (not his only style, mind you), and I think it works well for the film. Armstrong is gaining speed in the film music industry, and I think that he is definitely someone to keep an eye on.