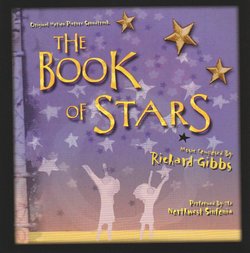 The Book of Stars

Review: Book of Stars, The

"All my memories begin here, in the pages of my sister\'s book. Looking back I remember how Mary filled it with laughter, smiles, and magic. But I didn\'t understand any of that, I only believed in forgetting until Mary taught me how to turn the pages of my own life."

That quote is from the 1999 movie The Book of Stars and it\'ll give you an idea of where on the sappiness scale this little baby ended up. It stars (no pun intended) Mary Stuart Masterson and Jena Malone as sisters, one a hooker with a drug addiction, the other a serene dreamer with cystic fibrosis who begins putting together a scrapbook to revive her sister\'s interest in poetry and dreams. Their lives are intertwined with those of a handicapped neighbor, a refugee from war-torn Europe, and a prisoner. I\'m sure at some point someone learns a valuable lesson about life.

The score is by Richard Gibbs, former member of Oingo Boingo, who is better known for his light comedic work on a number of motion pictures, as well as some minimalist, tribal music for the recent "Battlestar Galactica" mini-series. His Book of Stars could easily have become lost in gushing harp arpeggia, overly dramatic violin chord progressions, and cheesy piano melodies, but Gibbs knows slightly better than that and he has come up with a beautiful score that plays as a fusion of Christophe Beck\'s fluffier fare and Mychael Danna\'s ethnic touches. The theme itself is refreshing: it sounds non-traditional to Western ears yet is clearly hummable. It is introduced in the "Main Title", played and sung by Anuradha Sridhar. She plays the Indian violin, which is a regular Western violin tuned differently and played in a semi-cross-legged position which allows for more freedom and more fluidic lines. This theme, along with the Indian violin, comes back in "Happy Birthday" over a rising flute ostinato and a dream-like trance induced by the glockenspiel and violins. It\'s what truly sets this score apart from your average Hallmark movie cheese fest.

The rest of cues are strong, yet occasionally dip a toe or two in the pond of Kleenex-sponsored melodrama, with recognizable string chords and emotional piano writing. The cue "The Book Is Finished" is a truly beautiful and restrained reorchestration of the theme for piano and glockenspiel over slowly-moving violin harmonies, while the following "Afterlife" climaxes with such a cheesy "swoosh" that you can almost see the angels guiding little Jena Malone being washed out in a huge white out effect. "Transcendence" is our little epilogue, with Christian rock piano accompaniment inducing fits of cynical and maniacal laughter. The original "End Credits" inexplicably shift gears to exploit the theme in a cheap blues-y fit of soft drumming and rock organ droning. The "Alternate End Credits" are thankfully appended, allowing us to wallow in the beauty of the Indian violin once more.

The Book of Stars treads the line between sappy melodrama and genuinely-touching writing with original, Indian touches. Richard Gibbs doesn\'t quite capture the essence of a Mychael Danna score, occasionally falling back on predictable clichés and heart-tugging string moments, but the score is strong, the theme is original and memorable, and the orchestrations shine from moment to moment. More emphasis on the Indian elements might have produced a score akin to Danna\'s Monsoon Wedding, which most definitely would not have been a bad thing.

Note: In this era of quick packaging, it is always fun to read enlightening liner notes where the composer recalls the whole process from spotting to recording with funny anecdotes. The liner notes to The Book of Stars are well worth reading, in spite of the fact that they praise the movie as the second-coming of filmmaking.