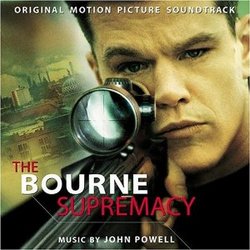 Bourne again! OK, now that I got the obligatory “Bourne” pun out of the way, let’s move on to John Powell’s exhilarating score. When The Bourne Identity was released a couple of years ago, I will be the first to admit that I did not even notice the music—I was pretty much wrapped in the action that I didn’t really notice a heavy theme riding over the film. In fact, it wasn’t until I saw the movie a few times on DVD that I really started to pick up on the very, very subtle way that Powell weaves the themes into the story. Fascinating work. For those of you who gave Powell’s Bourne Identity score (also available on Varese) more than a cursory listen, you’ll be pleased to hear that with The Bourne Supremacy, Powell has continued his motifs over into the continuing mystery-saga of Jason Bourne.

Whereas The Bourne Identity was a bit more of an action film, handled capably by director Doug Liman, The Bourne Supremacy, helmed by Paul Greengrass, is more of a thriller. Though directors were changed, somebody smart kept John Powell on as composer, and Powell’s style makes the transition nicely, keeping the same alternately pensive/frenetic mood as the previous film. Powell employs the electronics a bit when the action picks up (“Berlin Foot Chase”), but stays mostly orchestral for the dramatic pieces (“New Memories”), to emphasize Bourne’s inner struggle with a past he can only remember in pieces. Not out of place here is the inclusion of Moby’s “

Fans of Powell should enjoy the score herein, and those endeared to action-suspense scores with an electronic edge such as Harry Gregson-Williams’ Spy Game should enjoy this CD very much. Overall, Powell provides a well-crafted score for a well-crafted thriller. One can hope that should a third film manifest, Powell maintains his position as composer for the Bourne franchise.