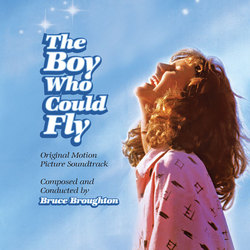 The Boy Who Could Fly

Intrada presents the premiere release of Bruce Broughton's emotional, soaring, and exciting score to the 1986 Lorimar film The Boy Who Could Fly. The major theme for in the score is first evoked gently with harp, flute, guitar and strings, embracing the characters in a warm, romantic glow.

This theme follows the story closely—taking us from darkness to heartbreak to adventure, all with a aching, bittersweet edge. Like all fairy tales, The Boy Who Could Fly has darkness at its center and director Nick Castle was open about portraying the devastating hurt of losing a loved one. Broughton carefully incorporated this, achieving a score that kept this pain either above or below the surface... but always there and delicately balanced.

At the time of the film, no soundtrack recording was released, although several months later Broughton rerecorded 34 minutes of the score with the Sinfonia of London for the Varese Sarabande label. Truncating may of the cues and in some cases simplifying the orchestrations, it never quite caught the spirit and detail of the complete score recorded in LA. This release includes the complete score, as well as the end title song by Stephen Bishop, "Walkin' on Air." Additionally, bonus tracks include "Fireworks" (from To Catch a Thief), composed by Lyn Murray for the 1955 Alfred Hitchcock classic and newly recorded by Broughton for a television sequence as well as the brief vocal "Back of the Bus" performed by the Coupe de Villes.