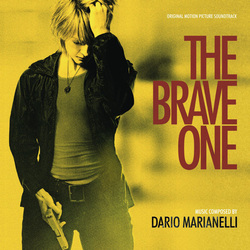 Review: Brave One, The

Coming into The Brave One, and going on the assumption that I would be in for a treat based on Dario Marianelli\'s previous work with the V for Vendetta score, I was sorely disappointed. At first I thought that his use of guitar in the track "Erica" was an enhancement, and it does give it a tender feel and fluid quality. But this soon diminishes with the constant light jingling of a chain in the first half of "The Tunnel" with its solemn string harmony and a feeling of emptiness.

When Jodie Foster\'s character of violent crime victim Erica Bain is unwilling to wait the time need to secure a gun license, she turns to illegal means. "Gun Shop" I feel doesn\'t reflect this. Certainly it gives the feeling of despair, but only vaguely. This may very well work within the movie itself but wholly by itself it does not - to stand on its own it needs to be more fully developed. Contained within the first few seconds of "Corner-shop" is a sample played in reverse, which sounds like a beating heart, and works in the context of the film. A fair amount of tension is built using dissonant harmonies and overtones below a sad melodic line in this track.

With "Back to the Crime Scene", Marianelli gives us a little something extra to perk our ears to, namely the alternating of pizzicato and arco lower strings beneath the ever evolving central theme played by winds, which then alternates back and forth between high-winds and cello. This is one track that I feel stands on its own.  Conversely, the track "I Saw Nobody, Nobody Saw Me", seem to never have gotten off the ground. We are first introduced to it by the same sample we hear in "Corner-shop" which quickly fades. We are then given harsh chordal choices to listen to with slow cello and staccato piano coming in much later, by this time the track is 75 percent over.

With Foster\'s character finally reaching her point of revenge in the track "Retribution", we can clearly hear the cacophony of madness of the characters anger coming out in the very beginning. This is soon overcome by rising chords reminiscent of the track "Remember Remember", from V for Vendetta, the chordal progression folding back on itself to build again and again and then slowly dissolve and become calmer until finally the tension can\'t be contained and it spills over with a resolution of sounds and tones. This give the track high tension in the beginning and the end, with a calm middle section.

With the ending of the film we have a resolution of both the music and the character development of Foster. It culminates with a distinctly orchestral choice for "The Aftermath" with light piano playing the over all theme of the film. The Brave One with its tenacious protagonist having found resolution, we clearly hear the strings transfer the mood of the piece into a major key and resolve the tension presented through out the movie and score.

The majority of this score is difficult to listen to removed from the film; within the context of the moving images it fits well, outside of that realm it becomes difficult to follow and at points tedious. I do however look forward to Marianelli\'s next score. Within the film this score works, but unless you enjoyed the film to a great extent and want to relive it shot for shot, it is just not worth the album purchase.