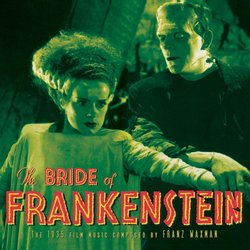 The Bride Of Frankenstein - Vinyl Edition

Ever since the classic Horror movie genre was at its peak during the pre-WWII era, Mary Shelley's The Bride Of Frankenstein (1935) starring Boris Karloff still remains the true cream of the crop. The black and white movie, directed by James Whale, is a prime example of how suspense meets great storytelling, the film's thriller elements making it a benchmark for many film directors.

Its score was written by Franz Waxman, the legendary German-American classic composer with an impressive number of Academy Award Nominations movies to his name.

Especially for Halloween, we've managed to release Franz Waxman's The Bride Of Frankenstein on vinyl for the first time ever! First pressing available as 1000 hand numbered copies on slime green vinyl.